throwback to the 90s with Not Enough and Moment of Collapse records.. 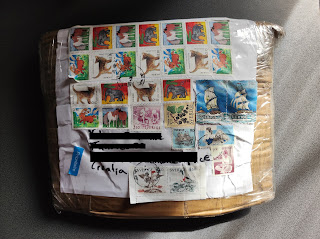 last few weeks I feel like punk archeologist.. digging through the depths of internet in search of some crust punk artefacts.. and well, the search was more than successful.. and the best thing and the truth is that I was having complete luck more than really searching and found those stuff more or less accidentally.. two packages arrived at the same day, one from Germany and the other from far away Sweden and both made me extremely happy.. it was long, long time ago that I waited mailman so impatiently like these days..
and yes, you can call me nostalgic bastard or say what you want but bands were better back then and whole thing about hc punk was more sincere and passionate.. that's the fact..
okay, let's see what I found..
HUMANITAR / WASSERDICHT - split LP
this one on total unexpected place while I was actually searching it for a stream on bandcamp or youtube.. from Moment of Collapse records catalogue for again unexpected 5 euros.. awesome.. never heard of this label before and when I checked the rest of releases they hold didn't find anything interesting for me.. but I'm glad I found this one..
split Lp of two similar hc crust punk bands, Humanitar from Germany and Wasserdicht from Slovenia.. one of the last and the best Wasserdicht's recordings here from 2001.. anyhow, great and legendary record with almost 40 mins of music.. 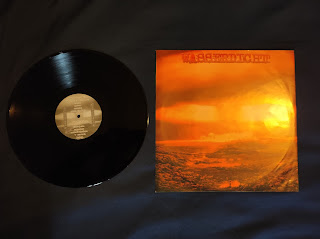 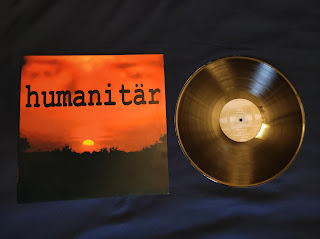 well, that was first find.. and the other, hey what a treasure.. story goes something like this.. crew from awesome Not Enough records (which are celebrating 20th years anniversary these days, btw) decided to buy old Dist and Confuzed distro which was collecting dust somewhere for almost 10 years.. and as you can guess it was hiding a lot of real treasures and already unavailable and pretty rare stuff.. a lot of awesome LPs which I didn't take into consideration because I would go bankrupt, then a bunch of CDs which I don't like as a medium so I skipped even to look for them because I would find something I couldn't resist and then incredible 340, yes you read this right, 340 different 7" titles and I simply couldn't resist to treat myself with some.. and the best thing, as a lot of those are probably unavailable anywhere else they could put all kind of insane prices but they offer it all for more than decent 40 SEK which is around 3.80 €.. 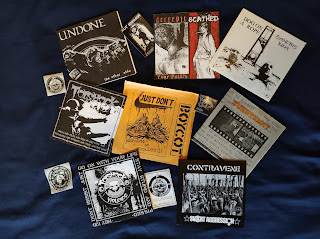 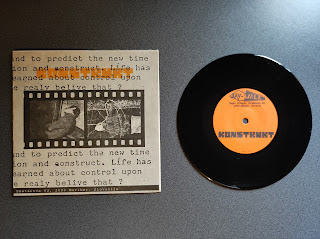 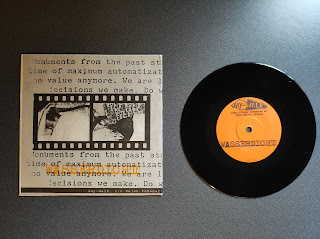 another one legendary Wasserdicht split, this time with mighty Austrian crust grind band Konstrukt.. released on Slovenian label Jay Walk in 1996..
it comes with really nice folded sleeve with lyrics.. one of those records for which I was sure I won't be able to find anywhere and to own it some day..
TOLSHOCK - The Heritage of Violence / Spikes and Studs... 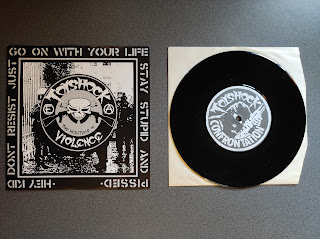 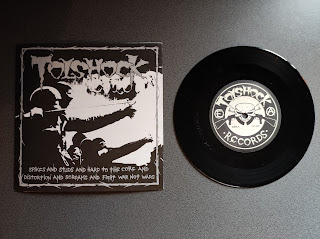 two EPs of to me one of the best crust bands from Sweden from 90s era, and maybe one of the best in general, actually.. great looking sleeves with lyrics and with classic, for the genre, style and cover art..
DECREPIT / SCATHED - split 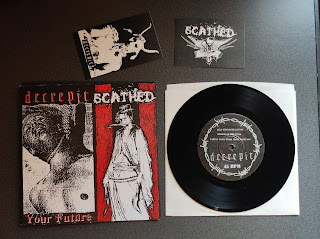 and probably the best piece of vinyl, musically, of all at here is this one.. split of two bands from Seattle, USA.. amazing Decrepit, one of the best bands ever to me, unbelievably energetic and explosive crustcore grind in veins of Disrupt but even better.. don't believe me? - just try it..
and on other side Scathed to whom I am not really familiar, knew them just because of this split but they are also great hardcore punk crust band, something darker an slower than Decrepit but I will sure look for other stuff of them if I find any..
and this one is definitely the most beautiful, with great artwork on front as well on the back side, especially Scathed part.. also stickers from both bands are included..
DOG ON A ROPE / SANCTUS IUDA - split 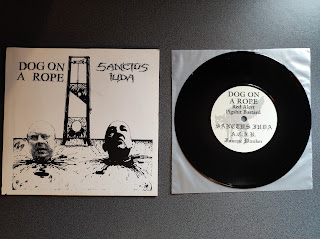 I buy this because of S. Iuda but Dog on a Rope are also legendary and well known, maybe even better then Polish, punk band from England.. very politically engaged little split EP with two songs from both sides.. released in faraway 1997 by two Polish labels..
CONTRAVENE / SVART AGGRESSION - split 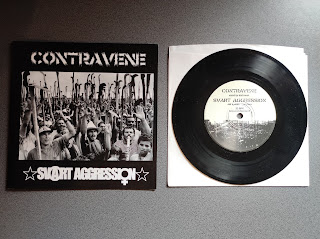 one more short political attack with two similar bands, this time in more anarcho peace punk style.. USA/Sweden collaboration..
UNDONE - The Other Side 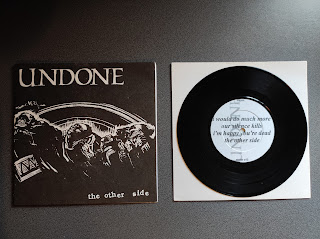 about my love towards this band I already wrote something more HERE and they were sure one of those bands for which I was pretty sure that I won't be able to get my hands and ears dirty on some of their physical records.. emotional hardcore/screamo at it's best.. of course with standard for the genre lyrics, dealing with social problematics, relations between people, etc. but they were also known for political and diy ethics.. this EP was released by Stonehenge Records in 1996 which was their drummers label and I believe it was their last record.. really nice black cover on recycled paper and sleeve style is like mini fanzine with columns (about what music means to the each of band members, about scene and similar stuff) and lyrics, both on French and English..
ARGUE DAMNATION / BOYCOT - split 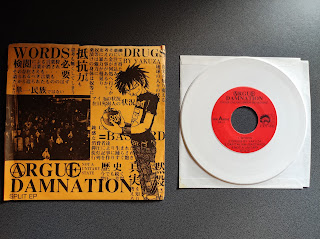 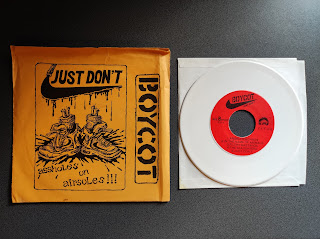 and for the end the biggest gem of all, basically the reason why I made this order, awesome split by two great bands, released in 1997 by Japanese label F.F.T. in which was, at least I think, Argue Damnation vocalist involved in.. he also stand behind recognizable chaotic artwork which follow almost all A. Damnation records and maybe some more Japanese bands..
Argue Damnation were anarcho crusty raw punk band from Kobe/Osaka, Japan and Boycot were well known politically hc punk from Alkmaar, Netherlands.. one of the most special records to me which I own in surprisingly good shape considering of age and non-standard sleeve which is little oversized than usual 7" wraps and is made from thin recycled paper..
there was a ton of other amazing 7" at Not Enough webshop which grab my attention, a lot of them were already in my "shopping cart" like some Warpath split, comp. EP with Argue Damnation and few more Japanese bands, Urine Specimen, System Shit, Health Hazard, two of Project Hopeless, Burek Death Squat/Patareni split, Prosecution 99 and many, many more, but total weight of package would be over 1kg and postage will unfortunately be double, some crazy amount of cash, almost more expensive as records itself so it wasn't had much sense.. some of those are still available so hurry up, because each comes in one or two pieces only, and grab some real jewels.. the best thing, new items are still coming every day..
Objavio/la ..crucified freedom.. u 08:57