probably the most interesting festival in this part of europe this summer.. many great bands and very interesting story behind this festival.. more about it here: http://optimalinija.org/?q=about or here: https://www.facebook.com/optimalinija.kaos.panonia/ 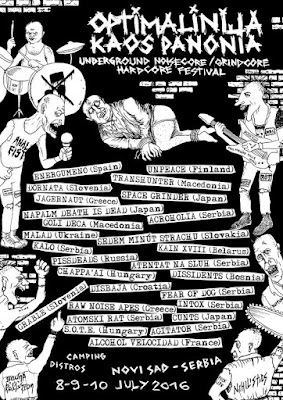 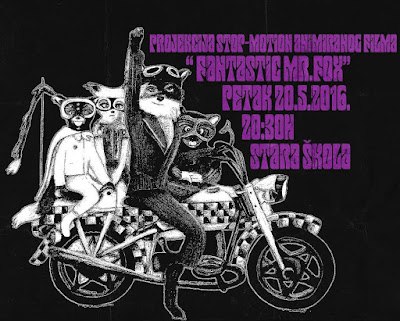 if you enjoy reading tour reports just like I do, especially from for us europeans, some less known and exotic countries, then I have something for you.. Crutches, raw d beat punk maniacs from Sweden were replacing cold north Europe with warm south-east Asia back in December 2015/January 2016 and now they gave us some memories from this trip in form of a tour diary at their blogspot.. you can check it by clicking HERE.. 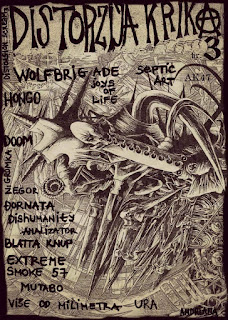 Distorzija Krika is fanzine from Serbia and this number is released in October 2015.. it consist mostly of interviews and those are with: Analizator, Ura, AK-47, Hongo, Extreme Smoke 57, Đornata, Mutabo, Wolfbrigade, Dishumanity, Doom, Joys of Life, Žegor, Više od Milimetra and Blatta Knup, and then with some artists like: Septic Art, Ica and Mina Pavlović, also here is an interview with Jasna from club Gromka.. beside those interviews you can read info about artist Marina Marić, some lyrics of bands such as Agrimonia and Iskra and there are a lot of great artwork all over the zine..
from interviews I would pointed out all from the before mentioned artists and with Jasna (Gromka) which are pretty interesting and from the bands maybe with Mutabo, Ura and AK-47 while other aren't interesting, somehow too usual questions as same as the answers..
all together on approximately 70 pages written on Serbian and mostly by hand which is the fact I like the most when it's about this 'zine, there's always more of some personal touch in such styled 'zines..
good thing in this number considering on previous one is that this time there aren't just bands interviewed and if in the next will be something more than just 'views that'll be even better..
okay, you can read it on facebook or download it from dropbox or just write here:

SUNBURNED LEG OF A WOMEN #1 fanzine 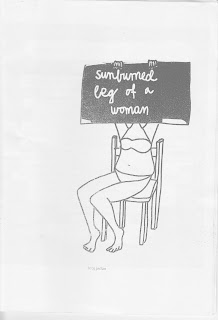 some of you maybe remember of Special People Club 'zine.. well Sunburned Leg of a Woman is a new 'zine of one of the authors of before mentioned one which left only on this 1st number.. but here is about pretty similar stuff so maybe you can consider this as a sequel of Special People Club.. but this time with something better and more quality artwork, even if I'm not expert on this field..
anyhow, this is art/personal 'zine with a lot of drawings followed by only one sentence or few words which completes the drawing itself and told us story behind it.. as the author says: "this drawings are comments at everyday events through which I perpetuates positive and negative moments I experienced, likewise some comic, interesting and absurd stuff which I notice in my surroundings and relations" or "even if drawings seems simple they have big importance to me because they're telling my story" .. if anything of this sounds interesting to you and you're into simple and minimalistic artwork probably you will like it.. and yes did I mention this awesome name, like it comes from some Tarantino's movie or some 60's surf rock band..
for the end boring technicalities: it comes on all together 28 A5 pages with interesting and nice black and white artwork.. again not sure when it's published, I've 1st time heard of it somewhere in December 2015 at some gig in Novi Marof and get it few weeks later.. probably still available but ask first at:

what's happening with fanzines here lately?.. after some revival of croatian zine scene in last 2-3 or so years everything settled down again and there are only few fresh numbers of some zines pops out here and there.. the last one published was Pajser Šmajser #4 but that was in September 2015, after which I didn't heard about nothing new.. let somebody correct me if I'm wrong..
anyhow, I have few 'zines which are actually pretty fresh to me cause I didn't have time, was lazy etc, for reading them or write some reviews so in next few posts you can read a few words about them.. 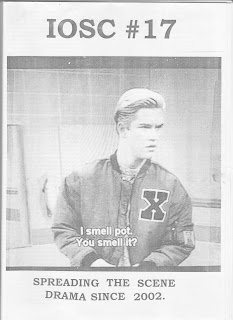 1st is IOSC and its 17th issue, pretty impressive number you must admit.. released somewhere in April 2015 on 48 A4 pages written this time only on Croatian.. from the content I would say already usual material for this 'zine, it means a lot of personal styled columns by the author, interview with Left to Starve, The Truth/Peoplefox and Bosonogo Djetinjstvo/The Truth tour reports, 'zine reviews and definitely the most interesting part of this number a poll among the currently active croatian zinemakers in which they answer on 10 questions about their own 'zines and their views on 'zine  and hc punk scene in general.. the best answers and the closest to my opinion are from Leki (Selftitled) and Jurica (SROA/Mentalna Smrt) but other are also quite interesting..
about design, also already recognizable IOSC cut and paste style with a bunch of small-font text and black and white printed pictures through the middle of the pages..
although I don't agree and don't share, like more than 50% of authors way of thinking about some things I must admit there are few things about which we do think the same, especially when it's about the current state on domestic hc punk scene (not all things, but some...), about social networks, etc.. anyway the best would be if you check it for yourself..
I bought it for 15kn (2 euros) if I'm not wrong and don't know if it's still available but you can try at: