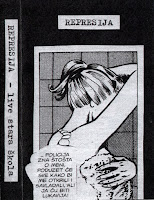 as promised, here they are, free download mediafire link and youtube video of Represija tape.. song "Odustajem" which didn't fit on tape and should have been the last track on it, is included here.. enjoy!..

the other day I found this video in a pile of old DVD's with music when searching for something else.. haven't seen it before on youtube, so here it is now.. recorded during their US tour back then in 2008..
I bet you all know, but if you don't, Cop on Fire was international crust punk band based in Barcelona, Spain, with former members of Consume, Madame Germen, Los Dolares, Decrepit and Ekkaia among others.. video quality is awful, but the sound is okay..
7:35 - aaaarrrrggghhh!!

REPRESIJA - live in Stara škola - tape is out now!! 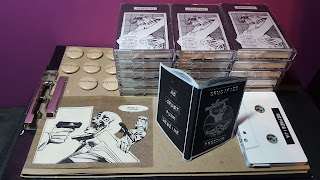 so the tape me and my buddy L have been working on for the last couple of weeks is finished and is available.. Represija was young, short lived hardcore punk band from Novi Marof without any official record so we decide to correct this injustice by releasing this tape with live recordings from the gig that took place in Stara škola 10 years ago at this year's edition of Rock in Marof, which was btw first time it was held in Stara škola, previous ones were in old cinema (staro kino)..
it's made in only 20 pieces, badge goes free with the tapes, so if you want to grab your copy hurry up and ask for details here: flomastercrni[at]gmail.com
and in case you miss it, download link, youtube video and review as well are in preparation and you can expect them here in next few days ;)
Objavio/la ..crucified freedom.. u 16:43 No comments:

I already mentioned this band before here, but they are so good they deserve few more posts and not just one here at crucified freedom.. live video back from 2018, can't find nothing about them from current year or more recent, there are also some live videos from 2019 but that's it, so I really don't know if they are still active and if they finished a record which was in preparation in 2019, if somebody knows, please leave a comment..
anyhow, this video is in my bookmarks for already long time and I'm gladly back to it every a little and think it's awesome, so it is here now as well.. enjoy the madness!..
this is loud... and filthy... and raw... and I get like 4 nervous breakdowns every time during this 15 minutes... and I like it..

tapes which I mentioned two weeks ago here are almost done, L is working on something little extra which will go with the tapes, some ..crucified freedom.. related stuff with one of mine old drawings included and it looks great, thanks on that mate ;)
this will be one bloody nice release.. stay tuned for more info in next few days..
ohh, the drama, how we are mysterious, hehe.. here's a little preview in case you're inpatient.. 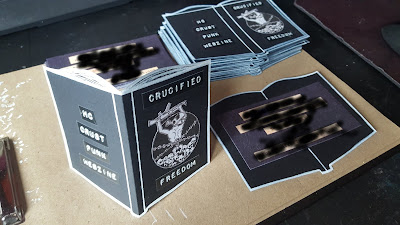 this is fckn brilliant.. I really love Terminal Sound Nuisance blog, I like the writing style of this guy, always has some super long but so much fun and interesting posts about filthy d-beat punk, crust and anarcho punk stuff, mostly about something older bands and records but he menages to cover last 40 years of dis never ending nightmare pretty well, I think..
there were already some great series of posts about Japanese crust, hardcore and d-beat bands on his blog and now he hits us with those 3 compilations about it.. to me personally Japan is the most interesting part of the world's crust and raw punk madness and real holly grail with already so much known legendary bands and facts but also kinda mysterious and still full of surprises and great for digging and discovering new stuff.. and the fact that Japanese bands and their style are biggest influence and inspiration, besides Swedish, of course for countless crust acts around the globe, speaks enough for itself..
usually, I'm not big fan of compilations, especially the ones in digital form, but I do like themed compilations focused on some city, state or style, and those are just great, dealing with last 30 years of Japanese crust (not d-beat punk this time, because it would be too long, what's the difference you'll maybe ask, oh well, there is, it's maybe a thin line, but...) divided in 3 parts, each for every decade of this beautiful madness and crust chaos hailing from the other side of world, represented all together with around 100 bands/tracks.. they are uploaded as youtube videos but you are also offered with mediafire links for downloading..
you know how kids have online schooling nowadays due all these virus situation!?.. well it's time for you to get educated about some Japanese crust on Terminal Sound Nuisance, those are basics and general culture knowledge but I really do recommend all the other stuff on this blog to find and learn so much crust, d-beat and anarcho punk related facts, bands, records and so on, and on...
go check those beasts, treat your ears with some serious damage and enjoy here:

this is my playlist for already few last days and it's still raging and hot!..
Objavio/la ..crucified freedom.. u 15:35 No comments:

I'll be working on this beauties in next few days/weeks.. just helping a friend with recording some tapes.. about what it is all about, let's keep it a secret for now, I will just say it's local, it's good, it's punk, it's nostalgic, it's 10 years old and the whole thing looks awesome..
more info about it you'll get when they are done.. 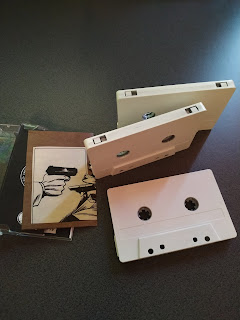 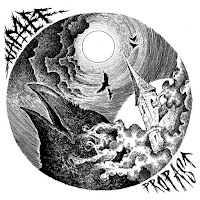 new album by Namet, crust metal punk band from Zagreb, four years after their debut, this time with lyrics on Croatian and with more death metal guitar, first hint to me after few seconds of songs Gnjev and Neka Gori was definitely - Dismember but check it for yourself..
and I have yet to mention, album is nicely completed with awesome artwork by Nadan Sarvan..
still don't know if any physical release is in preparation but until then go give it a try at bandcamp.. 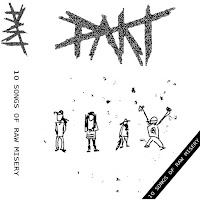 just few days ago I write some review about Pakt tour promo tape and now they published new album on bandcamp with material recorded at Radio Študent back then in 2018 and those are, I think, the same recordings which are on above mentioned tape, the only difference is that on tape there are only 6 songs and some have new, changed titles..
anyhow, great material, even better than on debut album so if you're into raw and noisy d-beat punk don't miss this little masterpiece and go check it here: