I'm not something overactive with new posts here lately (last post here was almost a month ago), but you know how it is.. last days of summer are here and I want to use them as more and as better as I can!..
3 weeks ago I was at Monte Paradiso festival in Pula and it was awsome!.. I've been there just last 2 days but I really enjoyed much.. I've never seen so much people on some underground festival before.. have seen some really great bands, meet some cool people, swiming in the sea, drink tons of vine and beer... what do you need more?!..
btw this was already 18th Monte Paradiso festival and that makes it already legendary in this area.. all bands which have been playing there you can find here..
big thanks goes to friends who had offered me a ride and ask me to go with them only two days before the fest when I was already quite sure that I won't go there..
tomorrow I will go at Balkanika Core meets Krastival festival in Slovenia.. hope there will be at least half good as it was at Monte Paradiso!..
when I come back (and if I come back in one piece,heheh) I will devote more time to this blog.. so soon I'm back with writtings and posting stuffs here..
hope you all had a great summer!.. cheers!
Objavio/la ..crucified freedom.. u 20:53 No comments: 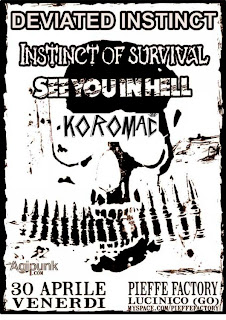 in this time of so many summer festivals which btw I mainly can't afforded (mostly because of luck of money, but also because I will hardly survive 3-day intoxication ,heheh, I'm old,heh), let's remind on this great concert which had took place in Italy few months ago..
this was the strangest gig I've ever been on, that's for sure.. first of all I decide to go on it just two days before and the gig was in Italy, "just" 314 km from here.. second, for every 1st May for the last 8 years I'm at one local mountain camping for few days, that's already tradition for me, and now I will missed it (actually I missed it only once in last 8 years, because of the military service).. and some other funny things happened there, but something about that I will talk later..
we set to go at 4:00PM when we finished our jobs.. 5 of us in a friend's car.. I was in some strange, sad mood ('cause I didn't go on previously mentioned camping) but few beers cheers me up, and when we passed the Slovenian border everything was fine.. the drive lasted for about 5 hours (not even close like when we go in Italy, Modena for the first time, when we were driving for some 12 hours through big snow storm just to see Agathocles and then in the end they didn't play at all).. we find the place with help of first two guys we were asking, and we were surprised 'cause we think that is hard to find someone who speak English in Italy..
when we arrived there strange things continue to happened.. there were just few people in front of the place and they all were from Croatia.. strange, considering that in this already mentioned past gig in Italy we were only strangers there and now all Croats,hehe.. later when some more people has come we realize that there are about 20 Croats, 20 Slovenians and only few Italians.. all that was probably 'cause all bands supposed to play that night (except Koromač, but with Diskelma) were playing one day later in Modena at Rovina Hardcore festival, so probably all the other Italians went there..
the gig was taking place at Pieffe Factory, really nice place, maybe a little to nice,heheh.. the entrance was 9 Euros (I think, but not sure) which isn't a little, I'm sure that in Modena was less, but isn't to much either when you know which great bands were playing that night.. also I was pretty shocked with very expensive beers there so I spend the night half sober..
the time before concert  was started we spend in front of the place drinkin' and talking with rest of the crew..
I don't remember exact time when gig was started but first band was Koromač from Slovenia.. I've never heard about them before.. some young crew playing crust punk with some metal or I would say, hardcore influences.. they even play cover of Doom's Police Bastard on my great pleasure.. yes,and funny was how they were trying to communicate with the people in Italian.. at the end they was very good and I'm glad to see this, until then, unknown band to me..
second on the stage was Czech madmens See You In Hell.. when I decide to go on this gig, that was mostly because of them 'cause I like this band for a long time and I was happy to see them live.. great show by them!
fast and angry crust core with great vokills.. their singer was crazy, he looks like he will kill someone every second,hehe..
after them one more legends Instinct Of Survival from Germany.. I'm sure that you all knows them so I think it's not necessary to spend many words on that how they sounds.. some people compares them with sex, hehe so everything more is superfluous.. stench core at its best!.. perfect sound, only maybe too loud sound system, but that is not about the band.. and very long performance by them..
last on the stage were Deviated Instinct.. I was very skeptic about them, you know how is with this reunion things usually.. and I must admit that I didn't listen something closely them before (I know, many of you are now calling the punk police because of that,hehee).. but they blow me away!.. great, energetic performance, excellent vocals, only words of praise for them.. great crazy changing tempos, with some faster parts and then again slow, powerful metallic crust or stench core, really great band!.. I was really positive surprised by them, but I think the rest of the crowd wasn't expect anything other by them..
as I said before, many strange things happened that night, so in this tone we continues and after the gig.. the DJ let on the speakers hymn of former Yugoslavia on general enthusiasm of most of the presented who was singing it loud.. and that is how this "Balkan invasion" on Italy finished..
we go home soon as gig finished.. one more exhausting drive home, but it definitely worthed!.. even the other day when we arrived home I and one friend go on this mountain from the beginning and drink almost the whole day without of sleep with rest of the friends..

KOROMAČ
SEE YOU IN HELL
INSTINCT OF SURVIVAL
DEVIATED INSTINCT

here are some videos from that gig which I founded HERE