great d-beat noise punks Pakt are planing another one euro tour in April/May and they need your help.. if you are able to set up a show for them get in touch via: pakt.punx[at]gmail[dot]com

Hola, que tal? Our master is slowly getting ready so we are slowly looking for 2018 tour dates. We are looking for some nice ppl to help us with gigs we try to get in the end of april/beginning of may. This is how we imagined our road but we are open for any suggestions that may appear!


So basically we have a date with cool guys n girls in Nijmegen. The rest of the tour is just a plan where we would like to party and make some noise.

Spread the word plzz and lets help Pakt to have their best time of this year.
Maybe we take some cool band with us, so your dissapoitment will not be that huge!

Thank you and your parents for giving you existance!!
See you around? Lets hope so!! 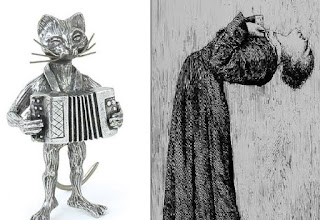 two acts from Belgium Matrak Attakk (grind/crust/anarcho punk band) and Ztratila Se Kocka (accordion solo project) will hit the road in April this year and will be visiting Hungary, Italy, Croatia, Slovenia, Bulgaria, Romania, Greece, Poland, Germany, Switzerland, Macedonia, Serbia and France.. on this hell of a tour they still need help for some gigs, besides other in Zagreb, too.. so if you could help them feel free to write at: bastardpy[at]hotmail[dot]fr
confirmed dates as well as those for which they need help are below..

short footage from last Pž Forces gig in Tom klub.. I heard something, like it was interesting gig with police raid and everything.. besides Nuclear Altar and No Name there was also Zamak playing but I can't find any video of them from that night on youtube but if you use facebook you can check it there..
and hey, if we are already in Požega, there are some hints that Hellback are back on track just for two gigs.. more info about that one when it comes.. 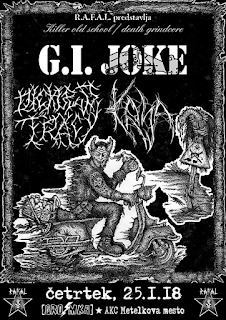 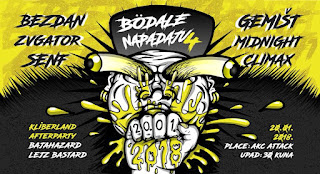 CC - Wasteland EP is out now!!

hell yeah, 1st EP by CC is out and available at bandcamp.. recorded in already well known Studio Depth and is released just today.. 4 songs of fast and furious hardcore punk with female vocals, just perfect to brighten up this boring and cold day!.. I don't know if it will be released in any physical format yet, if it will be, you'll be noticed on time..
go check it on bandcamp while it's fresh and play it loud!!..
Objavio/la ..crucified freedom.. u 20:36 No comments:

I get an e-mail from this pretty fresh d-beat crust band from Brazil already few months ago, but due my laziness and sometimes luck of time I didn't give it a proper try until yesterday, and at the end I'm glad I did 'cause it's about an very interesting band, as they said influenced by Swedish d-beat and 80's hardcore punk, but there are also visible strong classic Brazilian hc/d-beat influences like from unavoidable Besthoven and the likes.. it means classic mid tempo driven d-beat, some solo here and there, even with traces of melody, all completed with rough but somehow hoarse vocals and as we can see from the titles of songs with already usual for the genre topics.. I really like when in a bunch of boring modern metal/grind/post whatever bands from whom I get e-mails usually, there pops out something actually good as this one..
they offer us with 3 songs which are published on "O SOM DO ABISMO" vol​.​1 compilation of Brazilian hardcore punk bands released by Discördia records (Fofao / Besthoven's diy record label) in November 2017.. those 3 songs are available on their bandcamp for streaming and free download so check it out!..
they are also preparing a new EP which should be released in the 1st half of 2018, so beware..

and for the whole compilation released as CD-R try to contact Discördia Records at this e-mail address: discordiarecords[at]hotmail.com
Objavio/la ..crucified freedom.. u 20:17 No comments:

PESTARZT - Ghost in the Shell (video)

Pestarzt, crust/hc band from Sombor, Serbia have a new video, this time for song Ghost in the Shell from their split release with From Soil which is for now only available as digital album on bandcamp pages, but it should be released as a split 7" in the nearest future.. video is made of various shots from their live shows and those from the road when they was on the recent euro tour during November 2017.. beware of the plague... 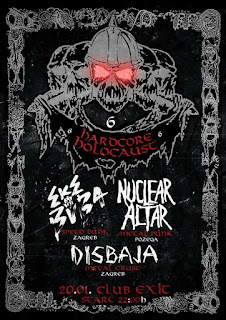 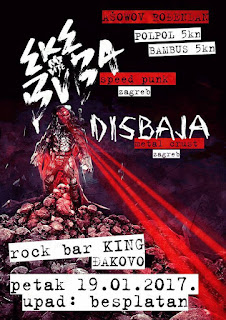 well, well... look at this one.. in the time when all those reunions of an old bands are already starting to look a little funny and in some cases you gotta ask yourself if all that have any sense and what the hell is actually all that about, is it just some trend, desperate try to earn a few bucks on gigs, merch and few new/reissued records counting on the old "glory" or they just want to show to younger bands how this was doing back then.. well, I'll left that on the consideration to hc punk philosophers, anyways I am always trying to convince myself that they just love to do what they do, maybe they want to experience all that today when equipment, studios, labels and all other stuff are more available and affordable as it was the case back then..
to be honest, in the sea (not only sea but ocean, hehe) of all that reunited bands I didn't care something special for most of them, except for Doom for example (well also for Wasserdicht, Nonsense, Pizda Materna, Hoču?Neću!, Fight Back, Totalni Promašaj and Hellback, but you don't know them, do you?!..) but few days ago when I found out that Sanctus Iuda will make reunion for few shows I've got pretty intrigued and I'm really looking forward to see/hear how it will looks and sound like.. they are, to me, definitely one of the dearest east-european bands and it will sure be interesting..

according to Sanctus Propaganda, great fresh webzine running by one of the members of SI which exist just few months if I got this well, they will play 3 gigs and that will be:

-161 FEST, 17 March, Warsaw along with some well-known Polish bands, incl. HERIDA PROFUNDA, EYE FOR AN EYE and more.

also there is a plan to release two records with some old but remastered recordings:

“Disco” 2LP/2CD on NIKT NIC NIE WIE to include all split EPs (with SARCASM, SHARPEVILLE, REGENERACION, DOG ON A ROPE), ABC tape, all covers recorded by the band, the techno/rave remix of the first LP done my Brillo from SARCASM and the demo for the never released 2nd LP. The CD version will also include the first Lp of the band, called Rząd-Korporacje-/wy/zysk.

“Requiem for Kawakami” 12” split with DISCLOSE on Czarny Kot Rec. SANCTUS IUDA delivers 6 tracks recorded live in Rostock, JAZ, 1997. DISCLOSE play 9 songs recorded in their rehearsal room in 1998. The release commemorates the beer trade between Kawakami from DISCLOSE and Wojtek from SANCTUS IUDA.

both records will apparently be available in March/April 2018..

there is an interesting story about the split with Disclose, as Wojtek of SI said:
"In 2014 an old Disclose DAT master tape in a garage. Kawakami sent him this tape in 1998 for a split release with a Polish band of Michal’s choice, that never happened. Michał instantly reminds himself a story I once told him how Kawakami and I used to trade beer by post (once we got fed up with trading records, of course), and he thought that it would be most appropriate to commemorate this higly illegal procedure of smuggling local beer by releasing a split 12”EP with SANCTUS IUDA. So here we go, expect “Requiem for Kawakami” soon. DISCLOSE delivers 9 tracks recorded in a reh room in 1997, and SANCTUS IUDA plays live from Rostock (Jaz Squat) 1997. Both recordings were remastered in Riot Studio. The cover shows the very first beer I got from Kawakami back in the days and I am sure he would approve of this idea. The record will be available at the SANCTUS IUDA reunion gigs, maybe post. Copies will go fast so make sure it’s on your radar. Pre-orders will get you a wee surprise as well. Raise a proper pint when you listen to this one! Cheers. And share pls."

anyhow, I'm really looking forward to all of that and I'm starting to ask for some vacation days on my work to visit Diy Hardcore Punk fest in Gdynia, heheh..

P.S. - be sure to check out above mentioned Sanctus Propaganda blog with bunch of news, interviews and reviews..
Objavio/la ..crucified freedom.. u 22:15 No comments: 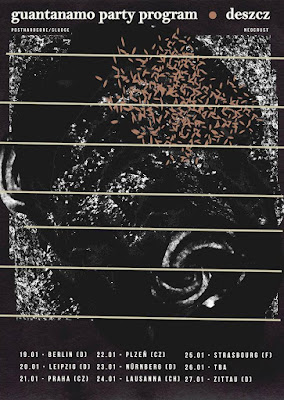 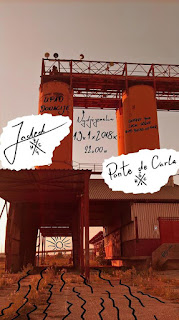 well, I forgot  to put some announcement for this gig here a couple of weeks ago (oh the horror..), so to correct the harm, here is nice live footage consisting of few mins of every band's show which played that night.. CC and Disbaja were great if it can be judged by the video.. I stole it from subsite.hr.. go there if you want to see some cool photos as well from the show..

nice one.. Wasserdicht's live show from Channel Zero club in Metelkova from far away 1995 in interesting line up when they was just a trio with only Mehtsun brothers + Robi (!?), I think on the bass..
some of their most legendary songs are here, including Protest and Survive cover by Discharge (last one on this video).. 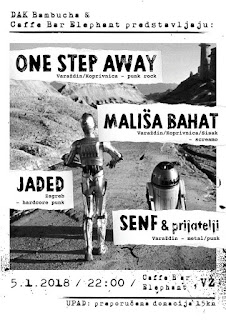