"Sore Throat formed in 1987 in Yorkshire, United Kingdom with one goal in mind: play loud and drunk noise. Call Sore Throat an "anti-all star" group of punkers from other bands like Doom, Deviated Instinct, Extreme Noise Terror and whatnot who have had their fair share of being in the "scene" for a while.
Sore Throat were an early crust/grindcore style band with a huge punk rock attitude. They are known as one of the first bands to innovate a style of grindcore called "noisecore". Though they seem very forgotten, they were apart of the hardcore/grindcore movement of the mid-late 80's in the United Kingdom and known for their "fuck you" attitude, harsh humor and ridicule in their music about other bands, society and so on. They sometimes were seen as a parody band while at times, they were also seen as a drunk political punk band. They were also one of the first known bands to incorporate many sample use in their music. 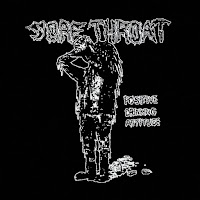 Some topics Sore Throat tackled lyrically in their music ranged from their distaste for Nazi's, capitalism, straight edges, and even taunted such bands like ..D.R.I..., ..S.O.D..., ..Napalm Death.., ..Suicidal Tendencies.. and so on. While the band talked a lot about corruption, they did have messages in their music which typically talked about being pro-vegetarian, pro-alcohol and definitely pro-hardcore music. They weren't really a band set to make history or make a stand in the punk community... they just wanted to get drunk, make noise and be the "craziest" band they could. They served as a band who pointed out what was "wrong" with the hardcore punk scene back in those days, especially heavily criticizing and slandering ..Napalm Death.. and ..D.R.I... constantly in their music.
Early demos and EP's, like the self titled (aka the "Death To Capitalist Hardcore" EP in 1987) were raw sounding and... well, messy sounding to say the least and most songs were always under a minute long. Most songs were blast-beat style grindcore.
The band's breakthrough and first full length LP, "Unhindered By Talent" in 1988, demonstrated the raw power and noise Sore Throat was capable of making. Some songs were traditional sounding Discharge-influenced hardcore punk anthems while most of the songs were short blast beat songs tending to be under 10 seconds. 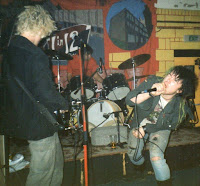 Their 1988 LP "Disgrace to the Corpse of Sid" can be constituted as one of the earliest experimentations in grindcore and hardcore music, taking a very "anti-music" stance; even more "anti-music" than most other fast style grindcore acts at that time. They incorporated distortion, blast beats, screams and grunts, and loads of sound effects. Up to this point, Sore Throat was seen as one of the earliest examples of noisecore music. Though the album was crazy in a unharmonized sense, the B side of the LP featured a doom style crust punk in the vein of Amebix.
Their last full length "Never Mind The Napalm... Here's Sore Throat" (1989) is seen as a more crust hardcore punk album with doom laden moments, not having a "noisecore" style like their last album and the album wasn't as grindcore as past releases. This release was the closest that Sore Throat came to being more straight up crust punk.
Upon future releases, they went under different names like "Soar Throat" and "Saw Throat" and released such albums like "Inde$troy", which was one whole long song comprised of doom punk, crust punk and even industrial.
The band has been broken up since 1990 due to conflicting problems within the band...

There will be no reunion. Ever. Fuck the world."


..crucified freedom.. note:
they still make one reunion gig in 1 in 12 Club in Bradford in 1991 and this year (2022) in May they released new album "Starving Wolves Stand & Fight", also are very active on facebook and bandcamp, where you can listen or download some of their stuff, as well as on reissuing some old records in collaboration with few labels.. 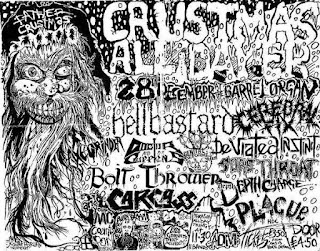 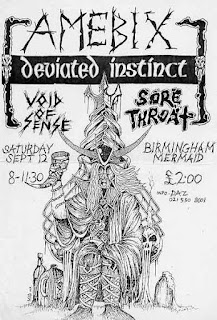 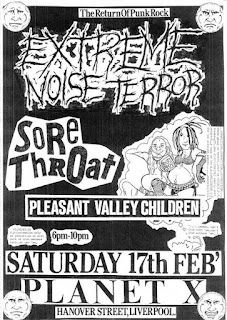 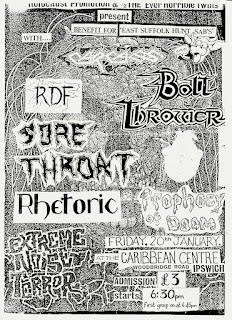