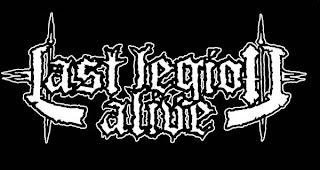 yes, I'm fuckn in love with this band, lately!!.. Last Legion Alive from Hellgium, you had an opportunity to get to know them better by reading the interview with them in some previous post here at blog..
their music is just perfect mix of some heavy as fuck mid-tempo parts and some fast crusty thrashing,  voKILL sounds like coming from dark depths of hell.. what do you need more!?? 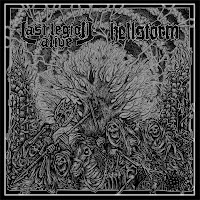 the news are, 1st, that their split LP with Hellstorm (also great crust band from Greece) is almost finished.. the LP will be pressed at the beginning of March and it should be out by end of the March.. and 2nd, and even better, they will hit the road and visit us again here at Balkans.. after their last year euro-tour when they were visited Croatia and Slovenia this year they will hit it even further to Serbia, B&H, Macedonia, Bulgaria, Greece.. the tour will be from September the 30th to October the 13th.. be sure to check the tour dates at their my space page, and don't miss them when they come in your town/country.. also there you can hear one song for the upcoming split 12"..

besides this euro-tour they will play on this years Play Fast Or Don't festival in Hradec Kralove, CZ, together with their countrymen Visions Of War and bunch of other great bands..

also, download their demo, and read better description then this my clumsy attempt at here..

uff, this is awesome!!
you want something fun and interesting for reading?!.. something full of drunken/stoned/perverse/kangaroo/crusty/beer adventures?!.. I have something for you.. there's an great and huge (it's really big!!) tour diary of N.D.T. of Australia, Japan and south-east Asia at their blog.. it includes also some videos from their shows.. give it a reading THERE..
Objavio/la ..crucified freedom.. u 22:36 No comments:

band from Nova Scotia, Canada formed in 1991(!?) under the name Disabuse.. members were Drock - guitar and vox, Amanda - bass, Gerald - drums and Pete -guitar/vox.. but after some line up changes (actually, numerous changes of 2nd guitarist) and when they realized that there are many bands calling Disabuse all over the world they changed their name into Existench..

soon they released their first demo under that name The Cost Of Living, then few years later split 7" with The Chitz and legendary 7" Divisions.. after those releases they started to appear on bunch of split tapes, 7", CDs, some official ones and many bootlegs, also their songs shows up on bunch of compilations from all over the globe.. members of the band were active on some other projects and bands at the same time (like System Shit for example...).. Gerald, the drummer was also the editor of Guttural Response fanzine.. 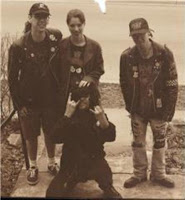 my first touch with Existench was when I listen their demo The Cost Of Living on tape, and first thought was: "what are those animals on vocals!?" and I remember that I like very much their drumming.. their mix of grindcore and crust was something new to me and it was most originally band in that time which I ever heard of, I think.. and this demo, actually remained their the best and favorite release for me all up to this days.. songs like Pointless, Directions, Divisions, Tolerance, Blinded and others just don't goes out of my head..
lyrics were also very good, intelligent and were the unavoidable to notice part of this band.. they singed about the things they were worried about, about awful business world which is part of every culture, about stupid people.. all in all very engaged themes said/sung on clever and direct way..
everyone who were listening to them knows what about I'm talking about and all you others who didn't heard of them, give a little bit of effort and try to find some download links for their releases (it's really easy job, 'cause there is a bunch of them on the net) and give yourself a pleasure with listening this old school gods..

I don't know exact time when they had stopped with work, but as the members says: "Existench never really broke out, just faded away!" 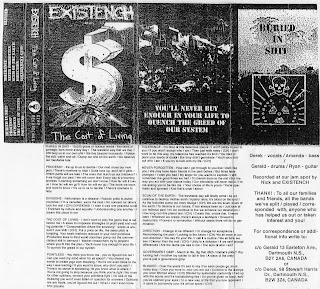 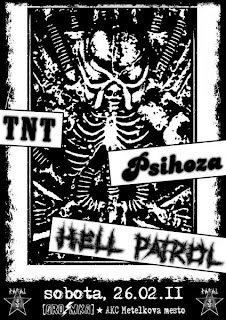 concert in support of club Subart
the Subart crew in last half year was contributed significantly to the enrichment of the Kranj's alternative scene and the two series of the inspection visits, in December and January, didn't stop them.. despite sanctions the club is working on, a financially exhausted.. similar situations have recently been numerous; today alternative is shaken by contracts, numerous inspection services which are not harvested on the whole, but on the functioning individuals which they criminally expose and financially exhaust.. as it's known, there is no need for legislation, also that the principles that are set are firmly anchored.. and it proves that day after day, with a program which is performed in the premises which we like.. we are here because we love this scene, because we love this music and everything what is built around it..
when the reality hits the idealism it is necessary to choose - are we going to withdraw all together and leave or we will face up to the given situation and try to defend what's possible.. but if we step back, what do we have remained?

together with R.A.F.A.L., the Subart crew will be supported by:

PSIHOZA grind core crew from ex MOZAK..
TNT explosion of crust and grind.. on the menu there will be just old stuff from 1996 - 2008
HELL PATROL melodic dark hardcore crusties are rising from the ashes.. members of Baka Yaro, TNT, AK-47, A. Propaganda

so Senseless post is updated with download links for few more releases.. check it out there..
Objavio/la ..crucified freedom.. u 22:21 2 comments:

again I'm not something active here, apart from this "copy/paste shit" you can find at this blog lately.. it's because I'm involved in and active (or at least I'm trying to be,heheh..) on one other project.. what is it about, let it be the secret, for now.. you'll find out on time.. anyhow it takes me a lot of my free time, so with my job, alcoholic adventures (which are often again, btw) I don't have time to give some special attention to this webzine..
Objavio/la ..crucified freedom.. u 22:14 No comments: 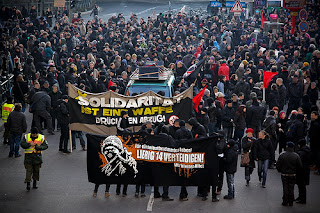 Police turned up in force at 4am, as well as protesters – mainly residents from other housing projects on Rigaer strasse in a show of solidarity against the eviction, despite the below freezing temperatures.

The building at Liebigstraße 14 was formerly a squat, and became a housing project in 1990 following the collapse of the Berlin Wall.

By 4:30am hundreds of protesters were outside Liebig 14, and at 5:00am police began to push them back in every direction. They also entered the surrounding buildings to gain access to the rooftops to monitor the situation as it unfolded.

One man was arrested and separated from his dog which police then tied to a metal fence down a side alley .

At 7:30am the police completely removed the press from within sight of the entrance to the building – at least 100 metres up the road. Vans were strategically positioned around the entrance to the squat so the media were blocked out. One policeman can be quoted as saying, “Today there is no fucking press freedom.” They were aggressive in pushing people back with many aggravated but ultimately unable to do anything to get the shots they wanted.

Just before 8:00am the police entered Liebig 14 through a window to the left of the main door. A battering ram and other tactical unit lined the streets – it was unclear what role they played however as they were out of sight.

At 8:15am the press were moved further back in a more aggressive manner.

Protesters began to run riot in the surrounding area, ending up on Frankfurter Allee before marching to Frankfurter Tor. Here riot police moved in trying to contain people with not much luck. Missiles in the form of rocks and bottles were thrown at the police, smashing on their helmets, whilst firecrackers disorientated some.

A number of arrests were made in a unnecessarily brutal fashion.

Tactical units in the form of armoured vehicles and water cannons turned up en masse, so much so that at one point all you could see were lines of police vehicles.

Most people began to leave the area around 10:00. Further action in solidarity with the residents of Liebig 14 is happening throughout the day.

The police managed to get into the basement and ground floor but are having issues progressing with the eviction as the residents removes the stairwell and have barricaded access from the roof. The fire brigade were also called as a bath tub was found full of water with electrical wires hanging out.

The residents of the housing project have been struggling with the owner of the building Suitbert Beulker and manager of child protection agency Unna, Edwin Thöne, over the termination of all the housing contracts. Negotiations with politicians to buy the house with the help of a foundation failed as they claimed they had no say in the matter.

Even politicians such as interior senator Erhard Körting and the senator for city development, Ingeborg Junge-Reyer who have been pushing a neo-liberal housing policy turned a blind eye and recently abolished rent benefits for people on unemployment benefits (Hartz IV). Holger Lippmann, manager of Liegenschaftsfonds (the Berlin real estate holding company), refused up to the end to negotiate honestly for an alternative space for the project.

Other housing projects in the area such as Rigaer 94 and nearby Køpi remain as self-governing free spaces.