demant was band from Križevci (Croatia) playing their own version of crust punk.. they were active from 1996.. members of the band were: Sajo (guitar), Đoni (vox), Mićo (drums), Tonč and later Dodo (bass)..
with their fast crusty punk music they sound quite original at their time.. they were actually one of first crust punk band from this area which I ever heard for..


in 1997 they record first demo which wasn't never officially released, they just copy it to their friends and the thing was spreading further among people and it was accepted very well.. one year later, in 1998 they release 1st album on split tape with band S.P.K... after this release they toured almost whole Croatia and Slovenia, and played in almost all clubs and on all festivals here.. besides this two releases they also have one live split with Bad Justice from Požega on tape.. in 2000 they record and release their 2nd and last album "Najbolji".. also they have song on various compilations like "kž shit", "benefit for attack infoshop", "benefit for obrana istine" and so on.. 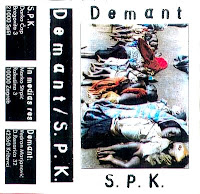 the members were active in some other bands like Raport, Ramones(ramones tribute), AK-47,... they was always into d.i.y. way of thinking and against any music industry, so they worked on their releases alone or with help of their friends and small d.i.y. labels.. lyrics was about some social themes, religion, war profiteering etc..
in 2004 band was broke up because 3 members were into some hare krishna thing, and with that other bands in which they was active broke up too..

you can download their split with S.P.K. HERE
Objavio/la ..crucified freedom.. u 21:30 No comments:

after plenty of thinking about this blog, fanzine thing I decided that there will not be a paper fanzine.. at least for now.. I know, you now think: another lazy bastard.. okay, maybe I'm a little bit lazy but it's not just that.. problem is in hundred of things, like lack of my free time for it, all stuffs with printing which is not so cheap, and so on.. this is not excuse, just letting you know..
but, anyway, the blog continues!!.. in near future you can expect here more interviews (I wait some bands to answer the questions already for a month or two..), some stories about bands which doesn't exist no more, but it will be shame to forget on them (that will be the most bands from Croatia, but maybe some from abroad, as well..), and all other stuffs for which I think it will be good to post them here.. if anybody want to get involved in just write and we will figure out something..
okay, that's it for now, cheers 'n' happy holidays to everyone!!..
Objavio/la ..crucified freedom.. u 22:27 No comments:

here is the video of new one-man project Charlize Gic which is run by my friend.. all work at music is done on computer except vocals.. 1st demo will be out somewhere at the beginning of next year.. more details here soon.. until then: comment, comment, comment.. 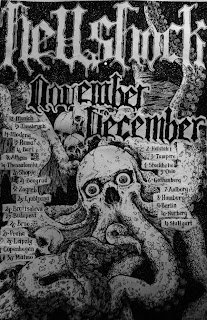 I was waiting for this concert for 2 months,since I was heard that Hellshock will have euro tour and among other, they will play in Zagreb,too.. I mean, it isn't every day that some famous American band comes to play in Croatia,hehe..
this time we go as as a full crew, 5 of us in my car.. we arrived there about 7:30 PM when in front of Time were just few people..it was cold outside, so we go in the club and there wait for beginning of a gig.. at this moment Slovenians 3 For 60 was having sound rehearsal.. I heard that they are ex Sodn Dan, so I was glad to hear them 'cause I liked Sodn Dan very much..after some time concert begins and in club comes more and more people.. first on stage were, already mentioned, 3 For 60..they even played one song of S. Dan "I disagree" and that was their the best song.. I liked their music but didn't like vocalist..it doesn't sound me good..he shout a little then he talk, like some rap,hehe.. I didn't like that but as a whole band they were okay.. after them a little break which we used for checking some distribution, Agipunk from Italy, I think.. great distro with lots of great records.. I noticed that on concert was many people from abroad, like Italy, Slovenia, and from all parts of Croatia.. 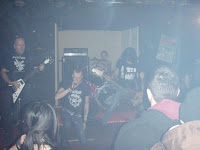 and then Americans, Hellshock start with playing..they come from Portland,Oregon(USA), exist from 2000. and they are quite known all over the world..some members plays or were playing in some other bands like Atrocious Madness, Detestation, From Ashes Rise,Warcry...
what to say about their performance?! explosion and destruction from the beginning..after some problems with the microphone (btw, which was problem for 3 For 60,too) at the first song, furious show continues 'till the end.. they play exactly how they should, not too short, and not too long.. they sound really powerful, like on their records too, and they didn't disappointed me at all, like no one else too, i think.. 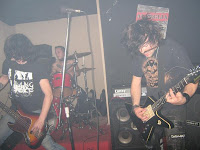 after the gig we was discuss about what they play, is this crust or metal.. I still think that this is good crust core, or stench core as some call that kind of music and this have nothing with metal, hehe.. anyway, another one great band in the row that are visited Croatia in last time, and that is great.. again one small reproach to organizers, because there wasn't any local bands included, but never mind.. it's better something that nothing.. 'till the next time!..
p.s. - photos are stolen from my space pages of some friends..hope they don't mind.. 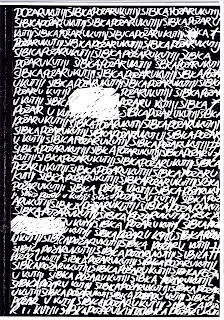 actually, I don't know anything about the current situation in croatian fanzine scene, so I force myself to investigate a little to find some new fanzines here.. so here is first one, I hope not last one, too..
it is made in good old d.i.y. cut 'n' paste style with nice black layout and unusual front page.. 32 pages,A4 format, written in croatian except interviews which are on english.. I like the thing that there are some personal articles, not only interviews with bands.. besides those author's personal lines there're interviews with The Assassinators and  Utrida Tapes, info about band Smack Attack and some gig reviews..
this 1st number was published in April this year, and 2nd will be out somewhere after new year..
author of this zine is is also singer in band Pedestal so check the band too..
order the zine at pedestal.zd@gmail.com
support the band HERE
Objavio/la ..crucified freedom.. u 19:59 No comments:

the Greek December – one year on

Independent Culture Centre „13” (CKN 13) was established in 2005 as an effect of activity of the “Krzyk” Association . CKN 13 exists to support non-commercial culture. CKN 13 venue offers both intellectual and utility space for people who want to realize the ideas that are either difficult to or impossible to realize in other places. It’s a venue for concerts, exhibitions, theatre shows, meetings.

By now we have already started some of our enterprises and ideas, there are concerts of bands involved in the independent/non-commercial scene taking place regularly, there are meetings organized, there’s the internet radio - ECHOPUNK , broadcasting music and live programs.
There’s also the band Exmisja connected with CKN13, which has it’s rehearsal room and mini recording studio. There’s screen-print workshop where patches, t-shirt and suchlike gadgets are made. Renovation works still held in the CKN 13 building employ a lot of our energy. Arts workshop and the Food Not Bombs kitchen are about to be founded. The closest plans include opening a regular INFOSHOP, a place where you could discuss with others, have a tea/coffee etc, access the internet, read/buy independent/freedom press. There are also plans to start a freeware-using computer workshop in the future.
We invite and everyone interested in joining our already existing projects or willing to start new ones of their own!
web page
my space
Objavio/la ..crucified freedom.. u 19:03 No comments:

We are part of global alternative movement. We are not donated by city government nor any kind of sponsorship. All work we’ve done, we’ve done by our hands. CRK is a platform of cooperation of artists and pro-social activists. We trying to create atmosphere to inspire and promote ideas what We share. We prefer methods than specific esthetics or taste, so we can’t be called one genre name. One for sure is a common: DIY.

In our culture activity one of the main goals is cooperation with artists, whose art is an alternative for consumerism - it's enough huge meaning to include either punk rock, or more avant-garde music which is in formal way giving many ways out from pop-culture. In our concert hall till now we had arranged almost 150 concerts, but also theater performances, exhibitions, video installations, multimedia spectacles and regular parties. 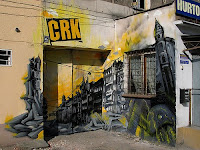 We also offer space and support for pro-social, non- hierarchical movements. Since 11 years as a community we are organizing Food Not Bombs Action. Every week we cook free meal for homeless people, without any economical support, using a vegetables which are given by farmers on the wroclawian markets. Our association organized several workshops for children from our area.

CRK is a complex of two buildings in closed backyard in city center. We are trying to arrange our place proper and still have some space for new people with their ideas. Till now we run a record studio, screen printing workshop, utopia café, concert room, rehearsal room for bands, bike workshop, internet radio, and guest room for bands and travellers. We’re planning to start with gallery, big kitchen to cook big meals . Our space can be used in different ways. Its all about imagination. Currently we’re giving space for regular poetry events, political meetings, cinema, african dance workshops and others.

It has been almost 8 years of CRK. The place is changing with us. Still creating asylum and background for alternative initiatives. Promoting diverse music and art. Playing with walls, roof and floor.