Pžbuka was all girl punk band from Karlovac, Croatia, active only for two years.. but even in such a short period of action they had a big role on Croatian hc punk scene, I think.. music was filthy and raw hc punk.. considering on current active similar bands, they remind me a little on Beyond Pink from Sweden, only something slower music..
here is some story about them translated from This is Karlovac not L.A. and also a short video from their live show in EKH squat, Vienna..

"during the postwar inflation of the bands here, 4 girls saturated with flood of male bands decides to try out with playing.. after a couple of months of negotiation we find a rehearsal room and shortly after that an band (Monosaharidi) with which we will share it, because in that time we wasn't had any equipment except the instruments.. 1st rehearsal was held in February, 1996 and that is how Pžbuka was officially born in following line up: Silvia - guitar, Tina - drums, Struja - vocal and Đez - bass.. 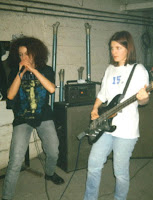 now we can say that those beginnings wasn't so bad, considering the fact that the only one who have some music knowledge and experience  was Silvia and we others were starting from the beginning.. but after only a few rehearsals we had some our own songs and we even start with live shows..
after a while Gabi joins the band as a 2nd guitarist, so all until Silvia's leaving from the band we play with 2 guitars.. in meantime Struja starts to sing in one more band, Starla Dick which were looking for rehearsal space and they joined us in atomic shelter..
shortly after, under the suspicious and never dismissed circumstances we leave the shelter and move to another "hole" - Partizan.. in that time were a bunch of other bands playing there and this was really the nest of Karlovac's underground..
in summer of 1997 Pžbuka records their 1st, but also the last demo "The Power Muscles of Vagina".. after that we all separated (fax, job, moving to England for doing babysitting...) so Pžbuka stops with work..
Pžbuka had a few gigs in Croatia and a gig in legendary Vienna's EKH squat.."

their demo you can download from HERE
Objavio/la ..crucified freedom.. u 22:03 No comments:

here is promo video for upcoming release of those two great bands, which I've founded at you tube few days ago.. it contains two songs from both sides.. awesome stuff!.. 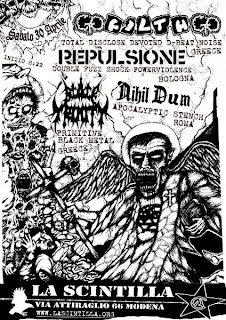 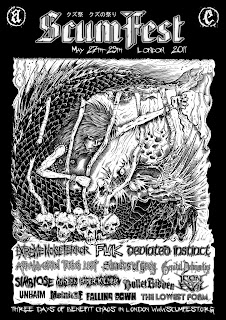 one more great festival, ScumFest in London.. some really cool bands this year..
it's benefit festival and founds generated this year will go to:
-to the family of Phil Vane (E.N.T.)
-relif for Te Whare Roimata (The House of Tears)
-Polish Anti-Hate Crimes Group 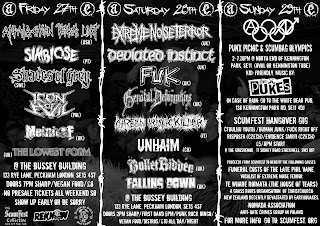 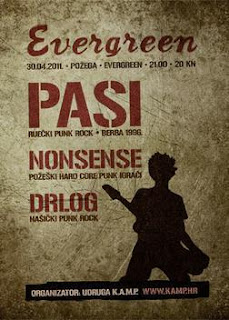 and after one year new Nonsense gig is coming.. they are coming again at the last year's crime scene, Evergreen in Požega, again the gig is organized by K.A.M.P. association, it means some good fun is guaranteed again!
Nonsense will present some of their new songs and small sound changes..
only the other bands are not into my taste this time, but that isn't matter, so see you (most likely) there!.. let's just hope that Nonsense aren't turn into melodic punk band, heheh..

the time of summer festivals is closing, again.. like it was yesterday since last year's were finished..
my this year's favorites are: Play Fast Or Don't (Czech Republic), Monte Paradiso (Croatia) and of course, Balkanika Core fest (Slovenia)..
first 2 of them already give us some info about the current line ups, so here they are:

PLAY FAST OR DON'T festival 2011
first is my unfulfilled wish for already 3 years now.. this year again amazing line up, great place as I saw on some pics and videos.. I really hope that I will find some sponsors to go there, heheeh.. 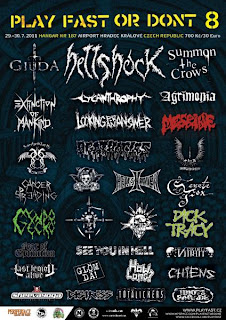 19th MONTEPARADISO festival 2011
and 2nd is already legendary Monteparadiso.. according to this first line up list there will be great bands again.. if nothing more, Skitsystem will play and that's enough for me.. 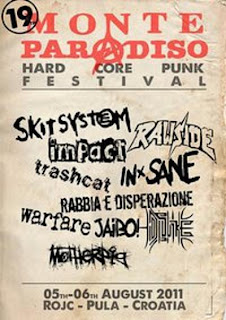 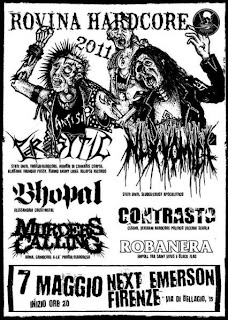 last week I received an email from this Brazilian band with kind request for help them out with spreading the word about their CD.. then Toni (vocal) send me some more info about the band and download link for their release..
"hardcore punk band with direct and simple lyrics.. that's the way how to define a style of band Dissidentes.. formed in 2002., have gone through several formations but always retained the style of sound that is characteristic for this band.. mainly influenced by international and domestic bands from the 80s and 90s as: Dead Kennedys, Circle Jerks, Minor Threat, Replicantes, Ratos de Porão, Black Flag, Os Cabeloduro, among others..
the band has recorded 3 works.. The first demo entitled "Brazil: Hunger, misery and exploitation," was recorded live and has 14 songs, without any great sound quality.. however, just "Do it Yourself." This recording was made in 2004 and still represents the old formation, with André on vocals..
the 2nd released record is the demo "Sedentary", recorded in 2005 and it already shows more maturity of a members and the recording quality than the previous demo. This cd has 5 songs which were half recorded live before some line up changes.. Toni, who is now leading vocalist has left the guitar in hands of Royal who returns into the band, after leaving the band due some personal problems.. Mario continues on the drums and Alex Sub on bass guitar..
The third material is the band's album "Dissidentes", where recording was made per channel on all 13 tracks, showing that the band took a few more rungs on the ladder of evolution, and was released in Avare Carnarock in 2008, where it was welcomed by the local crew..
we also had participated on some compilations, among others on Lixeria Humana vol. 6 and Abecedario Punk/Hardcore vol 2 which follows the line of Lixeria Humana.." 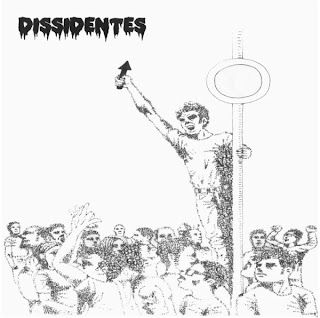 so Dissidentes are band from Sao Paolo, Brazil and here we have their album from 2008.. about their influences you can read more in the info above.. their music can be described as classical old school punk/hardcore on the way how it was played back then in '80s, it means fast and simple.. on this CD we have 13 songs in decent production, but still with a lot of the d.i.y. spirit..
also considering on their name (and the names of the songs, like False Images, Prejudice, Only Hits Woman,etc...) you can easily conclude about what are their lyrics, even if they sing on Portuguese..
maybe they are not something that I would listen to every single day, but if you want to give your ears a rest of all this crust noise this is the right stuff for that.. it goes fine with me..
they offer this record for free download so here is the link..
DOWNLOAD
Objavio/la ..crucified freedom.. u 22:36 1 comment:

one more band will be spreading d-beat madness thro' Europe in next few days, actually the rest of the April.. this time that would be Glöm Dä! from Sweden.. be sure to check them if you will have an opportunity for that, 'cause they are great band.. 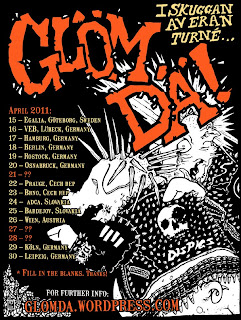 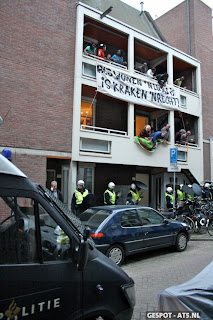 On April 3rd, there were two attempts to squat different buildings in Amsterdam. This all took place within the context of squatting being illegalized. The first attempt one took place in the early afternoon. Several dozen people guarded the door while people opened the building. Just as it would happen before the squatting ban, the police were allowed into the building. Surprisingly, the police allowed the building to be squatted.
The second attempt happened in the early evening. Fourty people surrounded the door to the building where the squatted apartment was. The rest of the apartments had a rent-cap (or the Dutch equivalent) and rent could not be raised. The squatted apartment was going to be put on the ‘free’ market which simply means that rent could rise and fall with the ‘free market’. Because of this, the residents of the building supported the squat.

Supporters on the ground distributed leaflets to all the neighbors, explaining what was happening and reminding them of the new squatting ban.
After a small contingent of police arrived, banners were dropped from the front of the building, one of them reading ‘WHEN HOUSING IS A PRIVILEGE, SQUATTING IS A RIGHT.’ The residents of the building went out on their front porches and drank wine, staring down at the crowd and smiling, pleased to be part of the effort.
After a few hours, four vans of riot police (ME—mobile entity) arrived. After ordering everyone to leave over the van loudspeakers, the police got out of their vans and began to beat people away to the edge of the block. Because the residents were so supportive, they did not allow the police into the building and the front door had to be forced open. There were no arrests because the squatters had escaped by boat (an event unique to Amsterdam).
The squatters and anarchists of Amsterdam are in a tricky and overall shitty situation. Squatting is now illegal, making everything difficult and confusing. For example, one squat was allowed to happen, the other was not, with no reason as to why. Also, there are is a government sponsored campaign called ‘anti-squat’ that has been gaining steam since the 1980’s.
This campaign allows a few people to pay cheap rent and live in empty properties just so that they are legally occupied and cannot be squatted. There are over fifteen thousand people willingly taking part in this ‘anti-squat’ effort that is very similar to strike-breaking in the US. The squatters and anarchists are repeating the tactics they have inherited from the 1980’s onward but are now in a completely different enivronment. There is now an urgent nead for more creative and confrontational tactics.

Go Filth Go are raw dis-beaters from Greece and they are preparing for an Euro-tour.. unfortunately they would miss Croatia.. you can check the dates and places bellow..
also they still need help for two days, so if you could help get in touch with them at their blog page: http://gofilthgo.blogspot.com/ 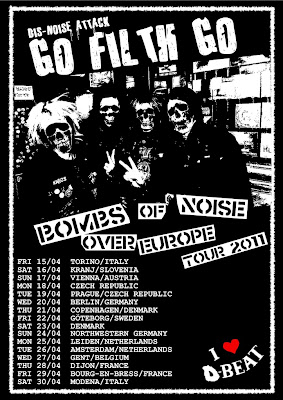