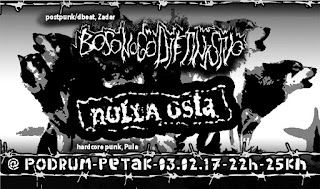 I am going pro, hehe.. got today some bad ass crucified freedom stickers.. thanks L for the idea and realization.. 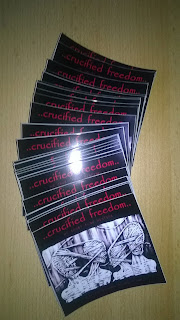 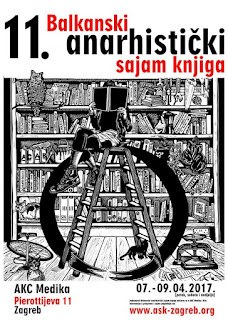 Participation at the bookfair is open for all anti-authoritarian/anarchist groups, publishers, initiatives, places etc. (not just from the Balkans) so feel free to come and set up your stall or just visit the bookfair to participate in discussions.

As always, we are open for all suggestions and ideas when it comes to discussions. Also, if you have a text or a book you find interesting and you would like to present it or organise a discussion about a similar topic, just give us a shout.

The idea for such a bookfair is not new and it is based on the positive experience of other Anarchist Bookfairs. In many different situations, these bookfairs have proven to be important events and meeting places on both local and international levels.

This is why we need your help - come and support this event with solidarity and participation!

If you are willing to organise a benefit event for the 11th Balkan Anarchist Bookfair, we would appreciate the efforts very much! The money goes to covering tiny bookfair expenses and for helping comrades with traveling expenses.

If you can't come to the bookfair, you can consider sending some free publications, posters and other materials and we will distribute it for you. Also, you can consider sending books and other publications for sale, we will organise a stall for all of you that can't come but would like to present your work at the bookfair.Contact us at anarhisticki.sajam.knjiga@gmail.com about details, the address to send stuff to, etc. 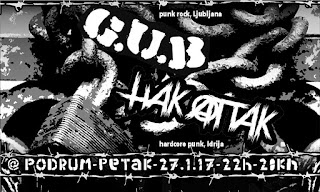 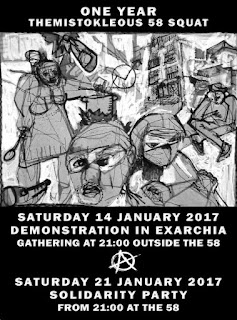 "On January 10th 2017, Themistokleous 58 Squat in Exarchia completed one year of activity. During this year our squat took a series of initiatives towards intensifying social war, and participated in numerous actions in support of projects and individuals targeted by repression of all authority.

We have put forward internationalist anarchic solidarity between rebels, believing that it can only be a reciprocal relationship aimed at building up affinity and complicity against the State, Capital and domination, and we continue to do so by factually tearing down phony divisions based on origin, language, gender, sexual orientation and religious or irreligious background of anyone in any way associated with our project.

We have stood up against the diffuse patriotism and racism (both overt and covert), and refused to discriminate against those who migrate on the basis of the status attributed to them by the authorities (refugees vs. non-refugees). We have sought to interlace the struggle against the control and repression of migration with a comprehensive, practical critique against the complex of domination, which is fragmenting and isolating any liberatory attempts to weaken and suppress them more easily.

We have shielded the anti-institutional character of our project by all means necessary, keeping the squat and its activities free from the presence and influence of NGOs, media and any intermediary. We have defended our political autonomy without altering the fundamental characteristics of our combative community. At the same time, we chose to meet with others on paths of multiracial clashes, working together whenever and wherever we considered that the respective political and organizational framework corresponded with our goals.

Themistokleous 58 Squat is both an anarchic political project and a housing space for people with or without papers. It is a subversive laboratory of theory and praxis, but also a place where individuals live and struggle together on the basis of self-organization, equal participation, horizontality, mutual aid and direct action. After one year of operation of the project, the experiences gained (both positive and negative) during the experiment of the 58 are a legacy of struggle valuable to us for the battles to come.

We invite everyone to join us on Saturday January 14th at 21:00 outside the 58 for a demonstration on the streets of Exarchia. We do not forget Shahzad Luqman, a migrant from Pakistan who was murdered by neo-Nazi scum in the Athens neighborhood of Ano Petralona in January 2013. We do not forget the thousands of migrants who were beaten, imprisoned, deported or assassinated by the world of states and their borders.

To support the project financially, join us on Saturday January 21st from 21:00 for a solidarity party at the 58; with live music performances by REZA ASKI (voice guitar from Iran) and SIMO (rap, from Morocco), DJ sets, food and drinks." 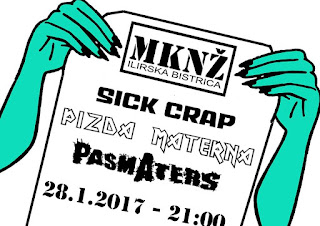 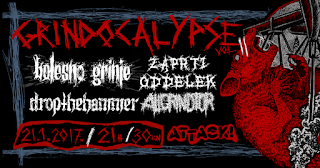 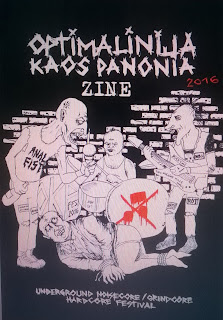 so Optimalinija Kaos Panonia was a grindcore/noisecore/extreme hardcore festival taking place in Novi Sad in July last year and was one of the most interesting underground festivals in this area.. it was actually a split of two festivals Optimalinija, originaly started in Moscow but becomes international through the past years and serbian Kaos Panonia fest..
the organizers of this event wasn't lazy so they even published their own 'zine in which are represented, with good and interesting interviews, all the bands that were performing this year.. really nice idea and it end up just well if you ask me.. don't really know if this was distributed before the festival or at the place of the event (I found about it few months after the festival, as usual, hehe..), but in the end it isn't really matters, what counts it's the effort put in it..
besides those interviews there is an introduction, article about history of Optimalinija fest and short description of the bands.. it doesn't seems much but there is a bunch of interviews and they are good.. I won't list all the bands here, you can check the festival poster.. at the first I didn't think it has some sense to write about it now since this edition of the festival is long over but there are some really interesting things about some not so well known bands which is always good..
there is print and reading versions available on the net.. all you must do is to download it and discover a lot of info about some pretty awesome grind/extreme hc bands..

Accident are hardcore punk band from Zagreb with members who circulated through many of the ex and some still active punk bands from Zagreb scene.. there was already few words about them on this blog before but in short: they existed since 2014 and if I'm not wrong already had something like last gig and had a few shorter pauses at their work but here they are with new album recorded in December 2016 and released on bandcamp.. this is their 2nd full length album so be sure to check 1st one also..
allegedly, there will be published some promo CDs with this material soon.. and until then if you want some pretty good punk (or on croatian: prilično dobre pankčine) go to Accident's bandcamp..
Objavio/la ..crucified freedom.. u 15:55 No comments:

something new, something fresh and something hell of a good.. new and fresh at least to me because I discovered Misantropia just the other day and good, well I'm sure you will like it if you're at least a little into crust grind or death metal.. don't know much about the band except they are from Portugal (yes, some parallels with Simbiose can be drawn..), exist since 2010 and are delivering greasy mix of crust, old school grind and death metal with great male/female vocals.. don't know if there are some other releases but this one is great.. it's recorded in November 2016, released as a tape on Larvae records in December and will be soon released as a split LP with Ruinas on Neanderthal Stench..
the best crust release in 2016?.. I don't think so, there are a little too much metal influences in there, but it's bloody close..
enjoy!..

so, new year is here, your shitty new year resolution has been made, you'll becoming a better man and everything.. don't worry - it won't happen..
in general, there's no any indications that this year will be something better then previous one in any aspect, at least from my side of view, but as it says: the hope dies last, so I wish to myself and to all of you a better and happier new year..

how to start a new year then with something that happen last one, so let's go..
I wasn't on any gig like since forever and don't really remember which was last one (maybe Hellback's gig in N. Gradiška??!..) and I really miss going on them, but to be honest there aren't any interesting gigs lately in my closest surroundings and don't have will, time and opportunities to hit the road somewhere farther..
so all that I have left is to read some gig review here and there or see some videos on the internet and that's how I found following ones at the subsite.hr pages.. those was some of the more interesting gigs lately, of course when it's about my music taste..

this one was pretty good, I'm sure.. I found about it just the day before when one of my friends ask me if I'll go, I didn't because the other day was working in the morning and later when I heard that the whole thing started only after the midnight that turned out as a good call..
pay attention on Disbaja, oh my... how they are good.. btw it was their 1st live show with the new drummer..
Pasmaters are one of the long lasting bands on the domestic scene and always well received in Zagreb..
and dinosaurs from Nulla Osta wasn't played long long time in Zagreb so they were probably interesting to folks who was there.. they also have some new members..
there are bunch of good photos from that night and a bad gig report on this link..
"na krilima slobode - ravno u smrt!"
HARDCORE!

believe me or not, I still wasn't in Klaonica squat not a single time and to be honest I'm ashamed of that 'cause it is the only real one squat in Croatia.. this time didn't go because of total bizarre reason - I forget about this gig.. I was sure to go on that, then forget about it and the next thing is I find some live footage from the gig on net.. total failure..
Altercado and M. Histerica, bands from faraway and exotic to us Chile were on their euro tour and already well known Krlja as a local support..
again gig report and photos you can find here.. apparently some fight broke out there during the night, which isn't nice..
"solo estas preocupado de la belleza de tus asesinos,  si te gusta la vanidad, comienza a usar la cabeza, si quieres sentirte importante... - asesina a tus asesinos!!"

and one for I didn't even know and I'm really sorry I miss it 'cause Disease are one of the most perspective d-beat punk bands from the Balkans (if the verb "perspective" can be used in describing one d-beat band, hehe..).. I mean I knew that Disease and Life Scam (both from Macedonia and sharing some members) are on tour and about their gig in Ljubljana but didn't have an idea they would also play in Zagreb..
and about Scab Eater (Australia) I 1st time heard while reading/watching this stuff here..
"Stacked and cuffed, bloody mess, Savage pigs, ruthless, Violent acts sanctioned by the state, Savage pigs, full of hate, No escape!"
D-BEAT PUNK!
Objavio/la ..crucified freedom.. u 22:15 2 comments: