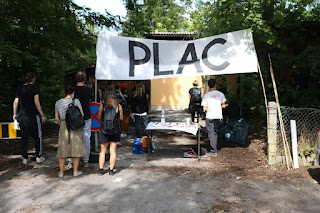 Last Saturday, a new autonomous zone was established in Ljubljana, called the Participatory Ljubljana Autonomous Zone (PLAC). The squat is located at 43 Linhartova Street, behind Bežigrad.
Around 13:00 on Saturday 3rd september, around 100 people entered the abandoned building of the former canteen of the Ljubljana Road Company at 43 Linhartova Street and declared the occupied building an autonomous zone. They wrote that they had created “a space for all those who have been sidelined by the socio-political order and deprived of the infrastructure for their cultural and political participation and the realization of their aspirations”. In the hours following the occupation of the empty building, the premises and the surrounding area were cleaned up.
The occupiers explained at the press conference that their motivation was the lack of opportunities to act in an increasingly gentrified city. A lack that has been felt by younger and less emancipated communities in recent years, especially after the eviction of the Rog Autonomous Factory.
The new autonomous space seeks to counter the social trends of privatisation and commercialisation of social spaces, which make universal participation Participatory Ljubljana Autonomous Zonedifficult or even impossible.
After the bankruptcy of Cestnega Podjetja Ljubljana in 2014, the former canteen is owned by DUTB or Slaba Bank. We haven’t heard anything from DUTB at the time of writing. The choice of the building carries a symbolic meaning, as the new users explain.
The Autonomous Zone will replace the wasteful management of social property with a program for all. In addition to self-organised cultural events and workshops, a people’s library is planned.
The police came to PLAC twice in the past few days. They have applied pressure by collecting personal data of the people around as a preventive measure. Reportedly in case of material damage to the abandoned facility. The new users of the facility, however, recall their pre-election promises to the People’s Initiative, in which many parties stressed the importance of autonomous zones and pledged to support new ones.
The re-establishment of an autonomous space gives back to Ljubljana, and especially to the cultural and political margin, the promise of what it lost two years ago. The promise of a non-hierarchical autonomous community gives rise to optimism that alternative self-organization will regain its place in a city that has been subjected to strong gentrification in recent years. However, it is not only the social margins that will have an opportunity in PLAC, but also the ruling political establishment, which may stick to its pre-election promises for a change.

Statement from the Anarchist Initiative in support of the new autonomous center PLAC:

"It gives us great joy to welcome the establishment of a new autonomous space PLAC in Ljubljana that started today with the communal-political occupation of the empty, derelict, and publicly-owned building on Linhart Street!
We see this occupation as a protest against the existing social order and as a concrete answer to the daily worsening of social circumstances and problems such an order creates.
Occupation is a political act of emancipation and direct action that addresses important social issues, pertaining to all of us and our collective futures. The housing crisis, high rent, and lack of non-commercial spaces for creativity and action are but a few of these issues. Indirectly, it also addresses rampant corruption, social inequality, and the distribution of the Commonwealth. The newly occupied publicly-owned building, that is managed by the DUTB (‘bad bank’ organization) quite literally represents the money we all paid for the great bank bailout of 2012. Back then, the name of the game was a shameless transfer of wealth from the have-nots to the haves. With this occupation, we are returning a small part of that stolen money to the people for communal use.
Furthermore, we see this occupation as a protest against the commercialization and commodification of our lives and society. For years, we have seen our neighborhoods, our towns, our society, and our very lives transformed by the interests of the capital. Those who have colonized all the aspects of society, subjugated them to their made-up laws and excluded anyone directly affected by these changes from the decision-making process. Ruling politicians – both local and national – remain diligent accomplices to those processes. Public space is shrinking and becoming privatized, the city is changing in accordance with the wishes of the wealthy, while mere residents are pushed to the fringes of society. All the activities, including the city and even the societal infrastructure, are subject to the logic of commercialization and profit. Do we need luxury apartments on every green spot? Is it sensible to accept Airbnb-style renting, when there’s a lack of housing for the young, the students, and even the local populace? Does every youth center need to transform into a for-profit bar?
We see this occupation as a continuation of the rich history of establishing autonomous spaces in Slovenia, which have already played an important role in different eras and areas. Regardless if it’s Petek 13. (Friday the 13th) of Železniki, the littoral squats of INDE and ARGO, or those in Gorizia, Sokolski dom in Novo Mesto, or Ljubljana’s AC Molotov and Autonomous factory ROG, which was so violently destroyed last year by the municipality. They offered alternatives and reflection in the times of disintegration, diminishment, and privatization of the communal, the public. Primarily, they created a space to freely self-organize, to create actions, and events in a not-for-profit space, and took up many social functions on a multitude of levels that the state didn’t. Such as taking care of the marginalized people: the homeless, the addicts, and the migrants. Or creating an exceptional independent and non-profit culture scene. Or all the crucial, autonomous, grassroots political initiatives outside the meddling of party politics. Student and Labour organizing. Addressing the Gig economy and migrant work. Feminism. The erased people. Antiracism. So, we’re really looking forward to all the many activities that are bound to happen in this new space!
We need to stress again that the creation of the new autonomous space is in the public interest. In the interest of the local community, the residents not only of this city, but towns all across the country, and anyone else who doesn’t profit from real estate speculations, building luxury flats, or political and capitalist corruption. We expect the powers that be to put down their batons and consider this occupation for what it is: A legitimate political act, whose results and future must be decided in the widest possible civic discourse.
We’re expressing our full support to the new space once more, and encouraging others to take up active support and participation both for it and within it. May today’s action be an encouragement for many others like it elsewhere and in the future!"