maybe it's to early, but I don't care.. after super great show of Hoću? Neću! in May, one more hc punk legends from Serbia are reuniting and will play few shows (!?), among others in Zagreb as well.. one more band on which many of hc punk kids from 90's/early 00's grew up on, band which, as legend says were playing gigs in front of 500 people, band which released record in Japan and band which surely was having a big influence on us all - Totalni Promašaj..
eh, and when you see who else will play with them, well maybe this could be even better then above mentioned gig.. so let's see what we have here;

if you are interested in how Totalni Promašaj are preparing and what you can expect be sure to check rehearsal footage on the following links:
PROBA 1
PROBA 2 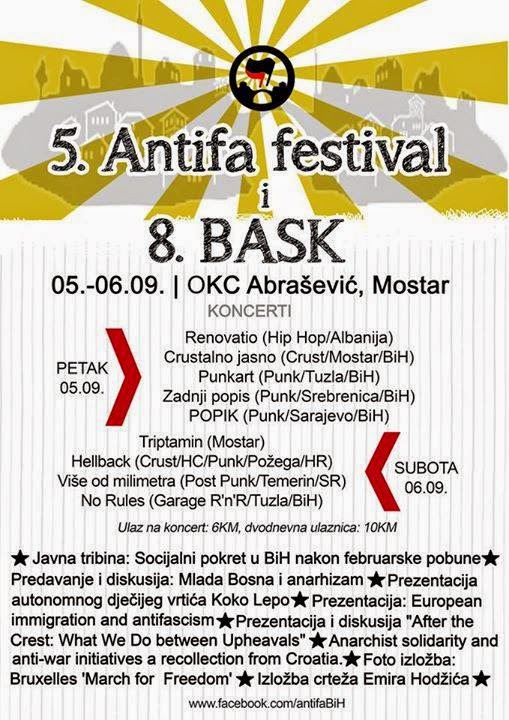 BOOKFAIR PART:
"Mostar in many ways represent misery that is imposed on big part of Balkan through divisions created by nationalism, war and fight for power between political elites which were and still are working on destruction of all social networks in town that go beyond these artificial "differences". All this fits perfect to capitalist logic of "divide and rule", since it's used as tool for prevention of all social revolts and attempts to build up social connections that were violently broken.

Even today, almost 20 years after the war, Mostar doesn't live like one town. Still, town did see new ways of resistance to imposed normality of nationalism and capitalism.

At this years BAB we will discuss about anti-nationalist and anti-capitalist struggles, anarchist anti-war initiatives and solidarity actions, exchange ideas and strategies, and above all, show that our solidarity goes beyond all borders and divisions created by authority and state."

more about program of both events and all the other info check by clicking HERE or find them on facebook..
Objavio/la ..crucified freedom.. u 11:09 No comments:

it's been a while since the last Nonsense gig.. I'm so sad 'cause won't be able to go on any of those two.. but however, it seems like they are back on track and it's time to sharpen you up and make you ready for a bit of good old angry hc punk.. don't miss them if you have opportunity, because who the hell knows when will they play live again.. you can check them at following places: 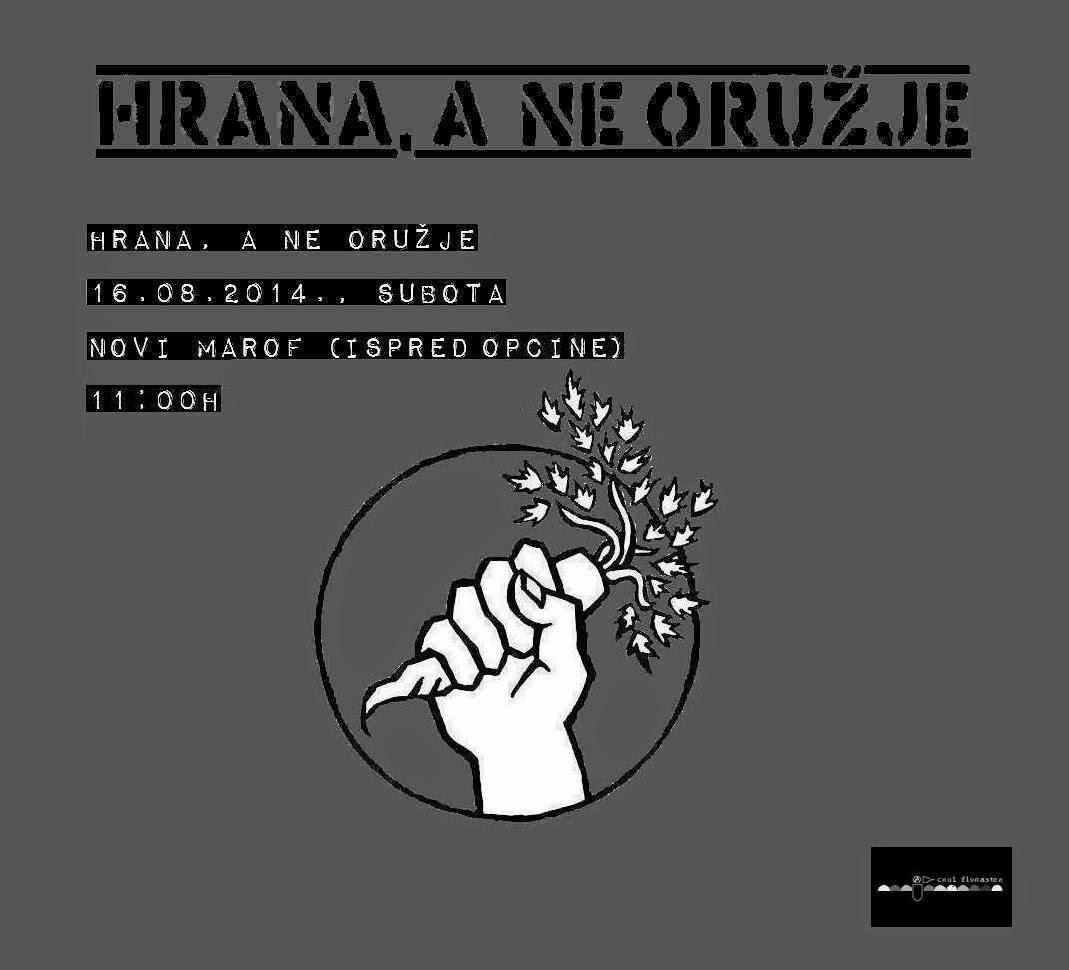 crew from Ljubljana is organizing a reunion party for squatters, activists and supporters which were involved in creating the story about autonomous zone Molotov which were active from 1999-2003.. this year is 11th anniversary of eviction.. below is a call up on Slovenian.. 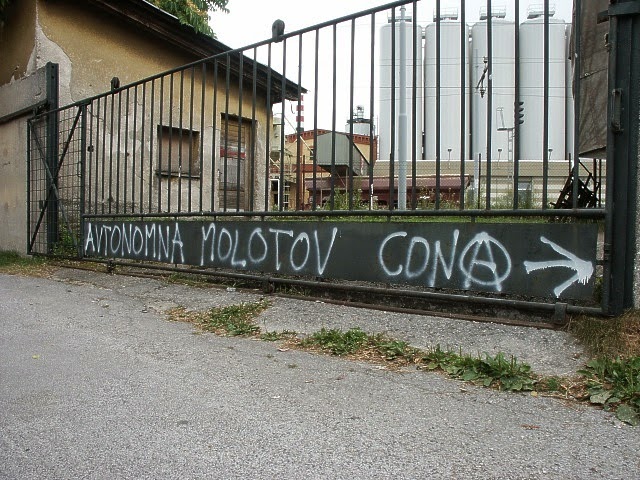 "Zadruga Urbana (Urban Cooperative in English) embodies the idea of an urban-agrarian platform that aims to connect collectives and individuals in order to improve self-sufficiency through direct action. It is based on shared principles of horizontality, autonomy and self-organization. Our vision is to bring together individuals and collectives regardless of previous experience, in a non-hierarchical way, to promote autonomy in local food production and freer access to public land.

We are not satisfied with the current system of food production and therefore try to raise people’s awareness of options for producing their own food, consuming locally and being autonomous – all through collective gardening. Our venture enables individuals with no land of their own to produce food. It gives them a better overview of some of the possible ways to self-organize, coupled with sensitivity for their local environment. Furthermore we believe it is necessary for a collective movement to take that process into their own hands. Through our discussions and practices we address issues such as (de)institutionalization of gardening, taking back the land or traps of green capitalism. We are proposing some principles of conduct that can help us go beyond norms forced upon us from official structures. The main question of Zadruga Urbana is how to fight the given frames of living, working and organizing, as individuals but especially as an informal group of people in the field of gardening and self-sufficiency.

In fact we are a small group trying to establish alternative practices through direct action: we squat/collectivize abandoned land in the city, we share knowledge, tools, veggies and seeds, we organize solidarity actions, public kitchens, we try to maintain a seed library, exchange/free donation markets with food, we screen documentaries. We always find something new to keep us busy. Regular lectures and talks on a range of topics such as permaculture and the institutionalization of gardening are the cornerstone of our activity. With produced food we also support benefits, public kitchens and open spaces around the city and are willing to share thoughts and experiences on the topic of claiming our right to the city. All of our events are free of charge for attendees. We do not do this regularly or by a certain schedule but as often as time permits.

Recently we have joined another initiative for a communal garden in the centre of Ljubljana for which the idea was brought up by two collectives and it is slowly becoming “more than just a garden”. Through sharing the space and through collective work people politicize themselves and that is what gives us motivation to keep on doing the most simple and basic thing we do best – gardening. It is accessible to everyone, especially with squatted land, it is a enjoyable pastime activity that can be (and for sure in our case also is) seen in a broader political context.

Everyone is welcome to participate in our gardens and network, to learn and share skills of producing our own food. The only thing we ask for is sharing some basic principles such as anticapitalism, antichauvinism, antifascism. Let’s take back the land!" 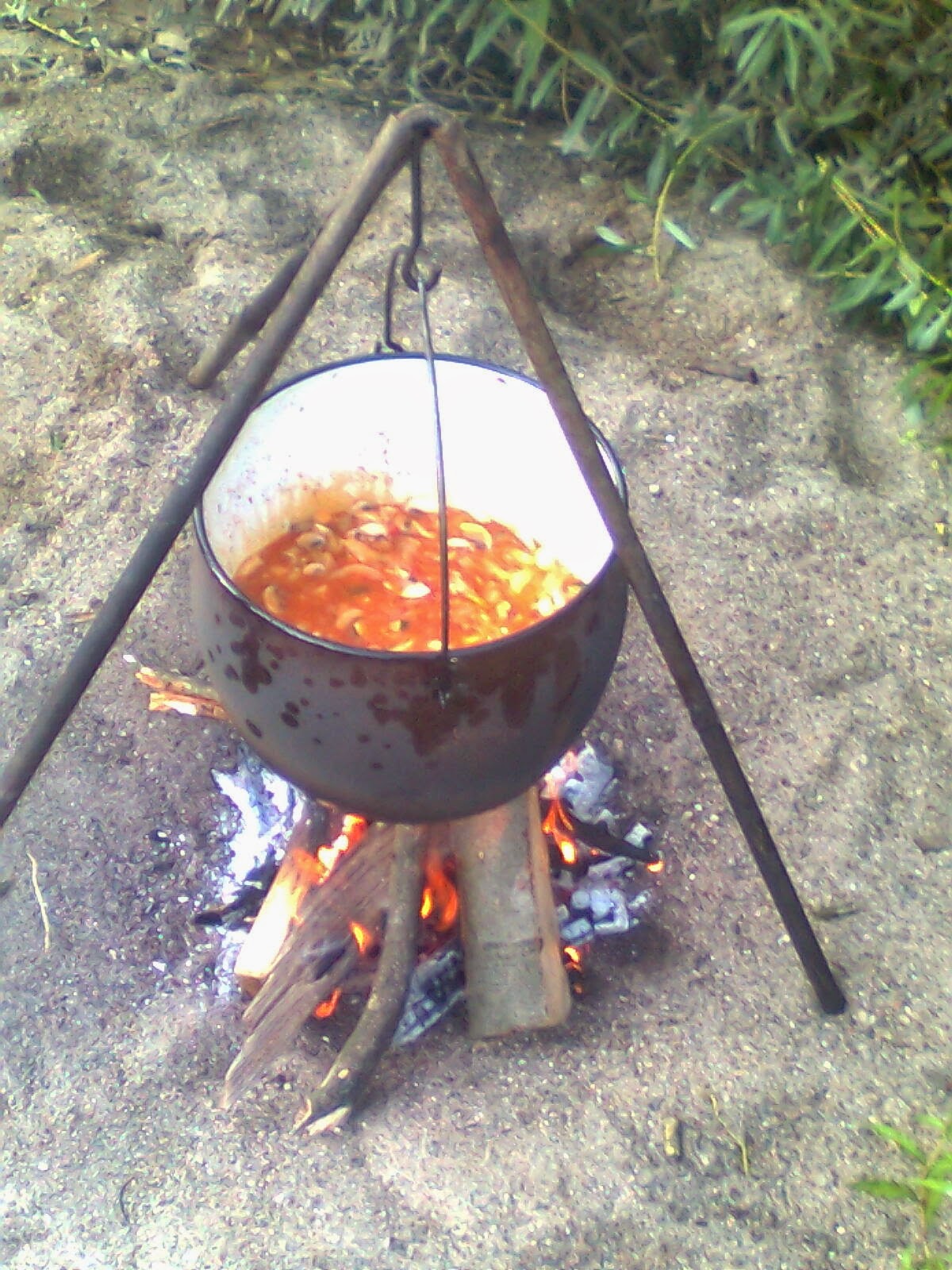 did you ever take yourself, two friends even crazier then you are, a dog, sleeping bags and kettle for cooking and went to the nearest river to make some delicious beans and spend the night there.. well I did..
now you think, look this guy never wasn't on camping in nature before, okay I was camping a lot before but never on such crazy place (if you seen it you would say that we aren't all clear in the head)
in first, there was a plan to spend a night and cook something in the wood but as summer here isn't really a summer in last month and half, weather is all fckd up and there is wet ground in the woods so we choose a nearby river..
so that's why we spend last weekend on small sand beach by the local river surrounded with dry trees, high grass, wild underbrush and nettles so we even hardly break to it and get our legs full of burns and scratches.. once we found this small beach we settled our things, had a few beers, place our drinks in the river to stay cold, surprisingly noticed that there aren't mosquitoes at all, etc. we started to collecting the woods to make fire and again after few beers and vine we went cooking.. B was chopping vegetables and preparing all the ingredients, H was setting the kettle, I was making fire and playing a waiter and S, the dog was investigated and searching the area for eventual dangerous and beasts but mostly from lying position..
the bean stew turns out great, it was delicious and after we eat like 3 plates each we couldn't move so we fell down and only have enough strength to pass the canister with vine among us.. the rest of afternoon/evening we spent talking, listening to music, drinking and eating few more times.. when the dark fell it gets more and more interesting, we started to talk about beasts that possibly lives around us and just wait when we'll fall asleep like radioactive sheat-fish with giant mustaches, king-size cobras, scorpions and don't forget almighty pušikara (it's local mythological creature which lives still today and is retained mostly in the park but also sometimes in the wood or around the river, attacking by the night, it first drinks all of your alcohol and then, as it's name on Croatian says it suck your d*ck, you may think this is a good thing but noone will ever survive this sucking and I won't even mention what will happen before you die to your...well, okay, you realized 'till now..).. also some strange green plant was growing all around and sometimes we had this feel like it's growing right now, you know it was all over our firewood and even around my bike.. that reminds me of Scott Smith's book "The Ruins" which I read recently in which similar plant killed all characters.. when I told about that to my companions they shit themselves and wrapped up in sleeping bags and went sleeping.. they didn't realized what mistake they just made because most of the characters from the books was killed or infected while sleeping.. I made my decision that I won't fell asleep there already before so I spend the rest of the night by the fire listening to some music and drinking..
luckily for us none of all those beasts didn't attacked us during the night, despite some serious noises and movements from the bushes, so we awaited morning alive and all well.. we drink few more gemišt (white vine + mineral water, for all of you who don't know what this is), eat some more beans, clean the place up and slowly moving toward home..
after all it was one more nice little adventure, nothing can't beat good diner, drinks and staying in nature under the clear skies full of stars, of course in good company.. we all agreed that we have to do it again sometimes..

pictures are again taken with my shity Rakia phone camera, click on the pic for bigger size, maybe there will be more of them soon..