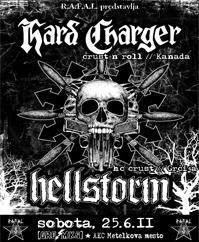 "Infoshop Iskra is an initiative for a library of anarchist and anti-authoritarian literature, as well as a meeting place for various discussions, screenings and workshops. We currently reside in the local book club called "Knjigozemska" which is located on the address R.K Jeretova 5 in Zadar, Croatia. This initiative is also an attempt of archiving books, pamphlets and zines which deal with anarchism, antifascism, feminism, LGBT, queer and various other subjects dedicated to radical social change. 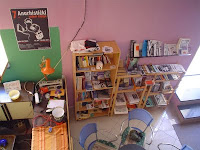 We exist as an informally organized affinity group which nurtures anti-authoritarian principles against all forms of social hierarchy. If you are interested in joining us, talking to us, or helping us create more activities, you can visit us Tuesday afternoons (and at 9 PM there are movie screenings!).. The book club "Knjigozemska" at the moment does not have steady working hours, but if you are passing by and find the door opened, you are always welcome to come in!"

Nepokoreni Grad festival is project going on since 2006.. the main goal of this project is encouraging on active deliberation of public about non used urban-space potentials in city of Karlovac and also about starting an development of local independent cultural scene along with usage of new media and technologies..
the festival will be held in Karlovac and it will last for 8 days, from 22 - 30 of June.. more info about the festival itself you can find here (unfortunately only on Croatian)

and now about the concert part.. 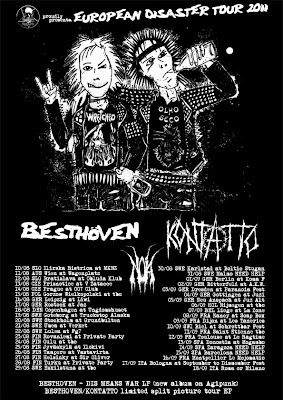 the hardworking crew from Agipunk aren't just having great label and awesome distribution but with their booking for some of the finest crust bands and their euro tours they are doing an excellent job.. after so many great bands in the past (Hellbastard, Massgrave, After the Bombs, Gurkha and many others), then Hellshock last year, Parasytix and Nux Vomica this year they will treat us with one more delicacy - Besthoven from Brasil, legendary band active from 1990!
and this isn't all.. company to this d-beat machine will be also legendary Kontatto (d-beat crust) from Italy and their countrymen Noia (blackened crust)..
of course they will be not visiting Croatia (we are not so lucky) but the closest point where they will be playing is Ilirska Bistrica, Slovenia on 10.08. so I hope that we will see you there.. it will also be the 1st day of the tour..
check out the dates and places by clicking on the picture for the larger size..

here's one more band and its record by the request of band members.. this time punks Auweia! from Cologne, Germany.. one of the rare, at least as I had opportunity to hear lately that still plays punk.. when I say punk I think on good old sound of punk, not today's commercial bullshits.. Ullah send me some info about the band and some other projects which they are involved in, so here they are..


"We're a band from Düsseldorf/Köln/Berlin and we're playing together since 2004. Influence is the German punksound from the 80ties. Bands like Tin Can Army, Canal Terror, Slime, Toxoplasma and Razzia...
We made a demo tape before with our friends from the band T.O.D. You can get it here.
We prefer the diy scene and are involved in it. Our Songs are a mix of political punk and funny/personal songs because we think that political punk is very important but you have to keep your sense of humor. So we can sing a song against homophobia and also about ghostpirates ;)
Our drummer also plays in the band Versus
I sing in another band that is a project of friends with members of Pestpocken, Kackophonia, Azrael, Rejected Youth and Ss-kapiert called Projekt Chaos.
We recorded just one song for the Feature chaostage in which Danny and me appear. It is called Innenstadtüberfall. The other band that is called Projekt Chaos you can find on you tube is a fucking neo nazi band that stole the name from us. But you will hear it because we play some kind of Chaos Punk and they Play rock shit. You can listen to our song on YouTube here
We're planning to go on European tour in September or next year. Maybe record a new album next year. I don't know. But who knows what the Future brings ;)
Thank you for your Support. 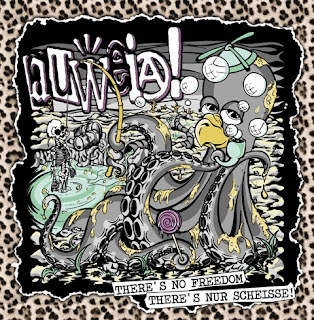 so this is 1'st LP of Auweia! with quite decent 15 songs.. I can't say on who they remind me or something 'cause I don't listen such kind of music very often but I can say that in their music can be noticed influences from old punk bands from '80s, as this is already mentioned in info above..
songs are from fast to some slower, more hymnic, in some songs you can even hear a sound of trumpets.. simple and without unnecessary complicating, I would say.. in short good old Deutsche-punk.. if you like this style of music I'm sure you won't be disappointed with Auweia!
singer sings in German, but on cover scans which are included in folder you can read some explanations of songs on English..record is nearly sold out so band offers it for a free download..
also visit Allfen Attacke blog which is done by a band member where you can find their other recordings..