some new bands out there

I talked recently with some friends about setting up some gigs, and when we have to decide which bands will we include there were none to think of, at least none that didn't play already 1000 times here, it means just few bands are really active, have shows every a little, same crew of people circulating all the time, and there aren't really some choice when you need a band to support some bands from abroad which are on tour etc..
and just when I had concluded that situation on the scene, when it's about the bands, can't be worse some new bands began to appear from time to time..
here are few of them, to be clear this is not any official listing of new bands, just few of them that I noticed lately..

I'm sure many of you already hear about LEFT TO STARVE from Karlovac which are interesting young band (actually not so new, they are active somewhere about a year now) playing crust punk with some dark hc and grind influences.. they are pretty concert active, with bunch of gigs behind them, have recorded a selftitled EP released on tape, and are preparing for euro tour with Bosonogo Djetinjstvo in September this year..

another new band from Karlovac is ARSTA with I would say some more modern sound, some kind of blackened crust, to me not so interested as Left to Starve for example, but worth of your attention.. they also have some recordings and you can check it here: http://islesofarsta.bandcamp.com/releases

ACCIDENT are from Zagreb, containing members from many ex or still active Zg punk bands.. on first not really my type of music, but as more I listen to them the better they are.. let's say hc punk with Disorder touch, and that's not bad at all.. check them out here: http://accident.bandcamp.com/releases

and for the end, for me the biggest surprise and favorites from those stated here, I didn't expect to hear such kind of a band here soon, are DISBAJA from Zagreb/Požega/Županja.. I actually heard for them few weeks ago from a friend and last week they already had a gig in Mochvara.. there's not much to say, raw punk in veins of Disclose, but also some ex-yu hc punk style is also present here, I think it can't be better than this combination.. they still don't have any recordings but you can check some videos from rehearsal here: https://www.youtube.com/results?search_query=disbaja&lclk=year&filters=short%2Cyear

that's all I can think of now, if you know for some good new bands don't hesitate to notice me.. and who the hell knows maybe this year will be a year of interesting new bands, as few last years were for zines.. maybe it isn't everything dead as it seems..

some new stuff from Požega

yeah, some news from Požega..
- 1st, some video footage from Hellback's last gig which took place in Županja..

- and just when you think that Hellback couldn't be better band I hear that they started to rehearsal with female vocalist Nani from ex Fight Back and Nepravda.. the product of it you can see in next video.. every comment is unnecessary, that's simply perfect..

- can't wait to see them live.. unfortunately I will miss my 1st chance on June 20th in Osijek, but if you have opportunity to be there, check them out, you won't regret.. 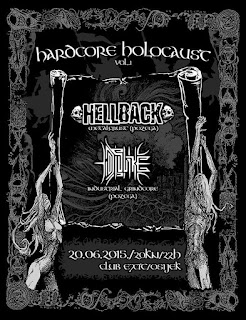 
- also there will be gig with two Pž bands at Mochvara, in Zagreb by the end of this month..

- and for the end there's a brand new blog runs by Kktz with his distro list and news about projects and stuff he's involved in, so give it a look here: OLDEN SONORITIES


update 23.06. :
- video from above mentioned gig in Osijek.. there are few others on Hellback facebook page..


what's interesting about this gig is that BTB are traveling on this tour by BICYCLES, yes you read it well, by bikes, that's the spirit..