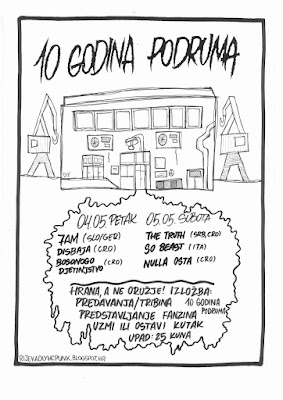 Podrum is a small diy place in Rijeka where a bunch of events, gigs and actions were hosted over the last 10 years.. after all this hard work it's time to celebrate, so the crew is preparing two-days party with 2 cool gigs, Food not bombs action, debate about 10 years of Podrum, exhibition, workshops and more..

entrance fee for gigs is 25 kn per day and all other programs are free..

for the end I wish them all the best and at least another 10 years if not even more!..
Objavio/la ..crucified freedom.. u 19:56 No comments: 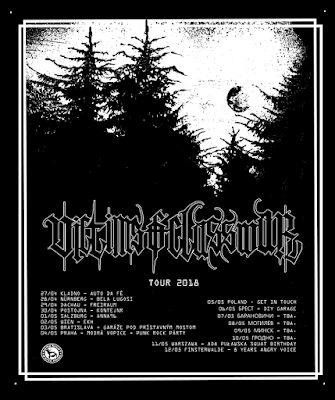 tomorrow starts Victims of Classwar (metal crust from Germany) euro tour.. they still need place to play on 5th of May somewhere between Prague and Belarus border so if you can help, get in touch with them here: klartsha[at]aol[dot]com  or at least spread the word..

full live footage from club Gromka in Metelkova Mesto, two weeks ago.. awesome!..
btw, CC tour starts tomorrow so be sure to check them out when they will be at your town.. 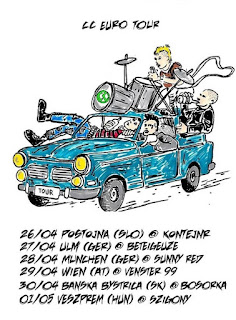 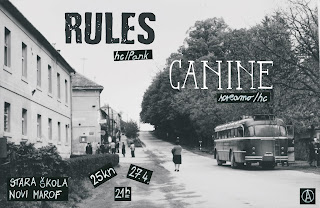 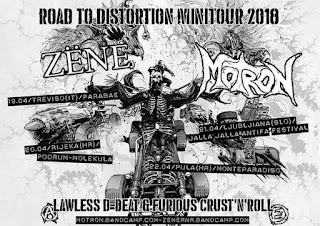 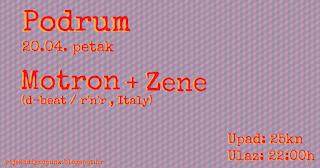 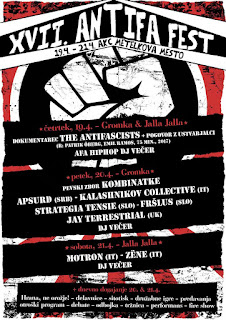 more info about the program
Objavio/la ..crucified freedom.. u 09:22 No comments:

Dishope, great d-beat raw punk band from Germany recorded new material after 4 years and their debut "Peace is more than the lack of war" released on tape by Mentalna Smrt.. to taste what's coming up check the new song published on their bandcamp..
they are also looking for labels interested for publishing it as a physical release, so if you want and could help write them at:

benefit gigs aren't actually nothing new in Marof, over the past years there were quite a few of them for various purposes and two weeks ago there was organised one for Anarchist bookfair in Zagreb which was held last weekend (6th-8th of April)..
I really don't remember when I was on some gig where at least one band wasn't having word "crust" or "d-beat" in it's full description or just part of it, but as always when it's about gigs in Marof it isn't just about the music itself and bands so there wasn't any chance to miss this one, even if my back was hurting me like hell and I had some serious troubles with walking/driving those days (btw this is the reason you read this report just today, I wasn't able to sit in front of the comp until the few days ago for more than 5 mins).. and in the end - 3 good hardcore punk bands which I wasn't seeing live before + it was benefit gig + all the effort my friend L is putting into all this diy hardcore punk stuff lately + venue, and one with another, it was just too tempting..
I show up there just after 22:00 and found out that all of the crew who was there arrived also just few moments before me, which is so strange for hc punk gigs but at the same time somehow usual lately, it seems like times are changing faster then we noticed it.. I remember when there were gigs here at least half people who attended it was gathering in late afternoon and started drinking and having fun all the way to the evening and concert itself, but obviously those days are gone..
gig started only after 23:00 and Indikator B opened the evening.. they are relatively new band and because members don't live in the same city they don't rehearse often and don't have much songs so their show was really, but really short, they played like four or five songs, each max 2 mins long and that was it.. probably one of the shortest live appearance I ever saw, but it was good and it is about really interesting mid tempo hardcore punk band in somehow old school spirit with atypical vocal which I don't mind, just the way singer is using his vocal is strange to me (I can't describe this) and I'm not sure if I like it or not.. last song was the fastest one and to me the best and unfortunately just when I get warmed up it was over..
after short pause guests from Belgrade - Apsurd takes their instruments.. I was really curious about them 'cause I liked few live footages I saw online and they didn't disappointed.. they are female fronted, on the first, classic sometimes mid tempo, sometimes fast hardcore punk band but they are reviving some 90's balkan styled hardcore punk or anarcho punk in their sound, at least I experience them like this.. great vocals remind me on something between P. Materna and Unutrašnji Bunt vocalists and that only can be big plus, they have as it seems to me very skilled drummer, a lot of spoken word in their songs, again I liked faster ones the most of which they have something more than it's the case with Indikator B so they had something longer set but again a little too short if you ask me.. I'm really looking forward to some their record in the nearest future and hope that they will last..
last band that evening were Eke Buba.. in last few months I heard a ton of praises toward that band and some kind of hype started to grow around them here on domestic hc punk scene and based on what I've heard from their stuff online I was wondering why.. but I must admit, Eke Buba live is scary good band, fast as hell, nervous and intense speed punk which run through Stara škola like super fast train tearing down everything along.. from the 1st song there was loudly approving from the crowd which isn't the thing happening so often in Marof.. singer was having troubles with the microphone which was persistently turning around and escaping from him, at the end on the last song even died, but despite that it was really impressive show by them.. one of those bands I wouldn't really listen closely at home but live... - the other story..
when we are already at troubles with microphone it must be mentioned that the sound, despite of some minor technical problems which are already usual for the "floor gigs" here in Stara škola, was quite good, everything could be heard and the whole sound wasn't trashy how we are already used to, mostly because of luck of some serious and expensive equipment..
in the end to resume it - it was another short, fast and good "ordinary" gig in Marof which musically teared down all my expectations (I was sure Indikator B will be the best band to me, then Apsurd and for Eke Buba I wasn't even sure to stay and watch them and in the end I enjoyed bands in reverse order), it was okay attendance, just I missed some local faces and I can't understand where are all those people who was mandatory on such events all those last years, even some decent amount of money was collected for ASK, all in all it was well spent evening..
another attack in Marof is this Saturday (tomorrow) so see you there!..
Objavio/la ..crucified freedom.. u 10:41 No comments:

I didn't do any interviews for ages, to be honest I'm not even in the mood for doing some, but today I read interesting one with Hellkrusher on Sanctus Propaganda blog so if you miss interviews go check it out here..
also new/old record is in preparation on S.P. label, about which you can find out more here..
Objavio/la ..crucified freedom.. u 22:45 No comments: 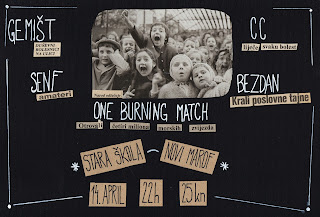 
please pay attention on descriptions of the bands on the poster, something like this: GEMIŠT (mentally ill people on the street), SENF (amateurs), CC (they cure every disease), BEZDAN (they stole business secrets) and absolute winner ONE BURNING MATCH (they poisoned four millions starfish).. I have no words..
Objavio/la ..crucified freedom.. u 09:49 No comments: 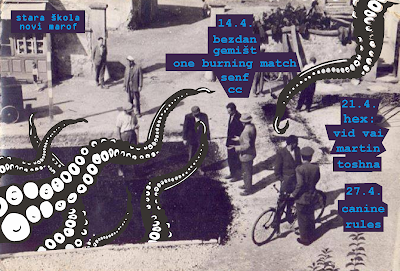 Novi Marof is alive and kicking again and that's the fact which makes me incredibly happy.. here's the poster for three upcoming events 'till the end of the month.. more info about them will follow here in next couple of days..
interesting fact: the original picture used for the poster is from 1960 when the road in the street where Stara škola is situated was build and covered with asphalt.. - that's the way you do your local diy punk gigs posters, hehe!..
Objavio/la ..crucified freedom.. u 13:49 No comments: 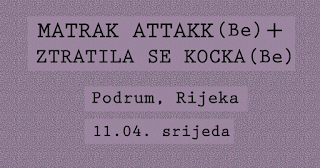 very interesting band Matrak Attakk, anarcho colored grind crust from Belgium are on tour and after some troubles around where they will play in Croatia they set up a show in Rijeka on April 11th, gig in the middle of a week, after a long time in Podrum so support it if you can.. with them on the tour is also one-women band/project Ztratila Se Kocka playing some kind of folk punk on accordion.. knowing Podrum and Rijeka this gig might be fun.. 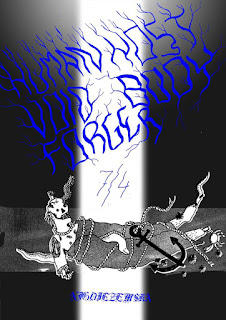 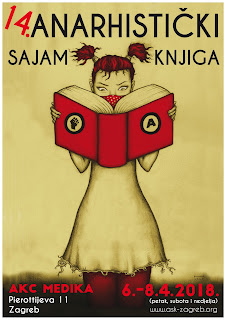 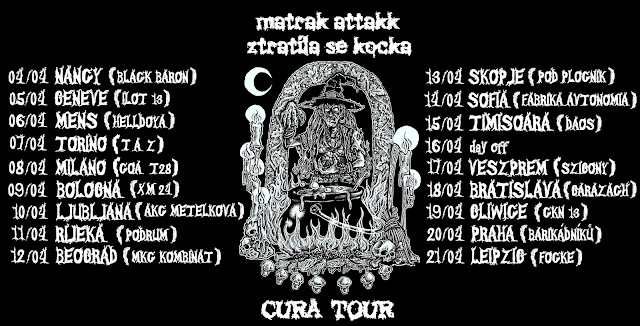 two songs from gig in Pontevedra which was the part of their recent euro tour.. want some black magic on drums? - check the 2nd video from 5:10 till 7:30, hell yeah!..