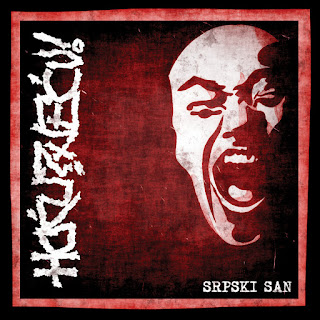 in time when it’s a huge trend to reissue some old albums on vinyl, it’s sometimes hard to find something worth spending some money on and to choose something from the ocean of awesome and sometimes not so awesome stuff.. there are actually almost more reissues than fresh albums of actual bands released on vinyl and that’s just wrong.. I was always sceptic about those reissues, sometimes it’s hard to guess what stands behind them, true love towards the band and their albums and wish that some of those legendary stuff are not left to be forgotten (it is unlikely that would happen in this internet era) or just opportunity of some shady "diy" labels for easy cash because everyone knows that some legendary old album will sell quick and won’t collect dust in some basement or under bed of publisher as this might easily be the case with some fresh band with which is always a risk and you could never know.. despite my scepticism and guilty conscience opposite on my diy punk principles even I sometimes can’t resist and buy some of them lately like Detestation, Disabuse or Anti Otpad and will probably in the future (ups, psssst, “Hiatus – From Resignation…” is in preparation on Ruin Nation Rec. and some Misery LP's are still available, huh..) because still think that reissues, at least those for fair prices are better deal than spending tons of cash on some rare old, used, beat up album on discogs or ebay (you’ll never see me swimming in that muddy waters, that’s a promise!)
but here we have something different, something for which I know for sure that there’s not any hidden intentions of label, probably with approval of band members, something that’s originally released in harsh and hard times back then in 1995 on a tape, re-released again as a tape 2 years later in 1997 without possibility and even intentions to release it on vinyl.. but since then get stuck in everyone heads who give it at least more than one or two listens.. those who listen it more in those times like me, well it probably changed their life..
we talk here about legendary band Hoću? Neću! started in faraway 1990 in Kraljevo and their most known recording, album Srpski San, re-released on vinyl by Mad Schnauzer records earlier this summer.. if some record deserve to be reissued on vinyl after so long time, well that’s definitely the one..
If you are into hc punk from very early ages of your life you probably have some bands that you listened while you were kid which guided your way of thinking and actually shape you as a person in some way, well for me that definitely was them (among some others like Unutrašnji Bunt, Radikalna Promjena, Verbalni Delikt, Bad Justice, Nula, etc.)
I remember, that beside awesome and direct fast hc punk sound what attract me the most was clever and in your face lyrics against the war, borders, nationalism, state but also some not so represented on domestic hc punk scene until then about patriarchy, sexism, animal rights etc. which all were brave themes for that time and unfortunately are actual still today.. those lyrics get stuck in my head forever, even all those small samples which were used as intro to the songs, still I know them all by heart.. this album on tape was among mandatory equipment inside my school bag and was spinning countless times in walkman, giving me so much great moments and few not so great, remember those were the times war was still very fresh and it wasn’t the smartest thing to have a tape with cover and title Srpski San (Serbian dream) in school in Croatia or anywhere else in public actually..
also what makes me interested and sorta inspired me was that they were very engaged band, and used their music as a part of their own struggle and intentions was that their anger and dissatisfaction through music transforms into more organized struggle, to get friends in as well out of the state border and bring new ideas and they sure succeed in this.. they weren’t something really active with gigs, and those which they had was almost always accompanied with some incidents, but they managed to organize tour in 1997 in Slovenia which has expanded on few cities in Italy, exactly thankfully to those connections and network of friendship with people from abroad.. that one sure wasn’t easy to pull off because the aftermath of war and all the difficulties caused by it, for example crossing the borders, getting visas and permissions to leave the country, etc..
also a year later in 1998 they visited Greece, where they recorded one show and that's how one more legendary tape “Live in Thessaloniki” was born, released by Kontrapunkt, Bloody Murder tapes and DHP&AK47 ..
When everything settle at least a little they did a tour in 2001 through Croatia, as well.. unfortunately I didn’t had chance to see them then, but I remember and will remember to the end of my life when they made reunion for just one gig in Zagreb in 2014, even though not in original line up, but well, what a show was that, what outburst of emotions and energy…even in one moment a tear drop felt from my face when they were performing songs Bednik and Pas moj prijatelj.. there are some youtube videos from that show on the net but not a single video can bring the real atmosphere where about 300 people stuffed in relatively small club sing all the songs from their hearts, when everyone started to howl and bark like dogs as a intro to a song Pas moj prijatelj or unbelievable energy during Bednik and Pogrešno kanalisano nezadovoljstvo and all other hits, constant moving, singalong, crowd surfing and stage diving, totally crazy and unforgettable, probably the best gig experience ever for me.. 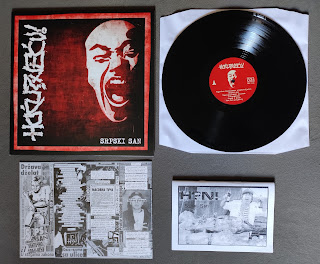 Similar emotions (even not so intense, of course) I felt while 1st time spinning this on my turntable at (almost) full volume.. all the energy and passion is still here and I will enjoy this still countless times more, that’s for sure.. as well as on vinyl as on my already worn out and noisy cassette..
Vinyl itself looks great and simple, it comes with lyrics sheet on harder paper and with booklet/zine with interesting personal thoughts of few people about this album and about how and when they first meet with it.. it’s pressed in 328 pieces and is still available from Mad Schnauzer Records or some local distros.. highly recommended to all 90s nostalgic suckers like me, but also to everyone else who are into hc punk, especially younger crew because album is relevant and actual still today and it was one of the most important albums in those crazy times even we maybe didn't realize it back then..
Sadly, former bassist Buksa passed away just few days before LP was finished and ready, so it is dedicated to him..
I’m really glad someone got an idea to do this, invest their money and actually realized it, so big thanks go to the folks from Mad Schnauzer Records, drago mi je što vi postojite…
bandcamp: https://madschnauzerrecords.bandcamp.com/
discogs: https://www.discogs.com/label/1058325-Mad-Schnauzer-Records
Objavio/la ..crucified freedom.. u 21:06 No comments:

this machine will tour the whole world one day, I guarantee it!.. 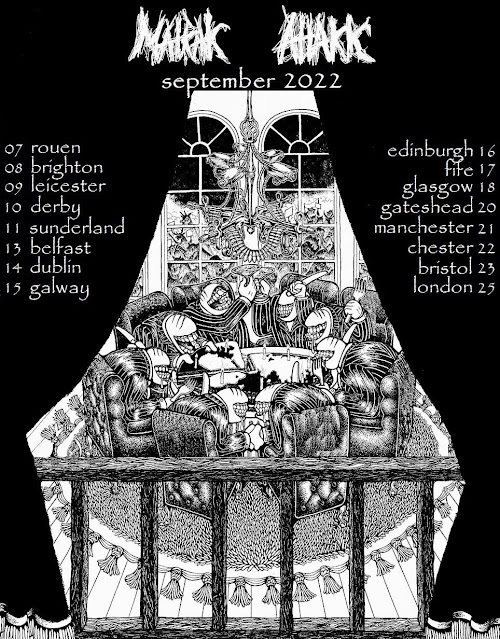 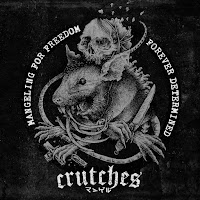 Crutches were working on a new album Dödsreveljen last couple of months, which will be the 4th full LP album of this raw d-beat monster, this time released on Profane Existence, Phobia Records and Not Enough.. while waiting for the LP's to arrive from pressing plant they mixed up this little EP of two songs previously released on two different LP compilations ("This is Malmö" and "Demons inside us - 20 years of Phobia Records")..
good way to treat your ears with some noise while waiting for Dödsreveljen LP, as far as for me, probably the most anticipated album of the year, if not since all that damn pandemic shit..
CRUTCHES - Mangeling for Freedom // Forever Determined digital EP 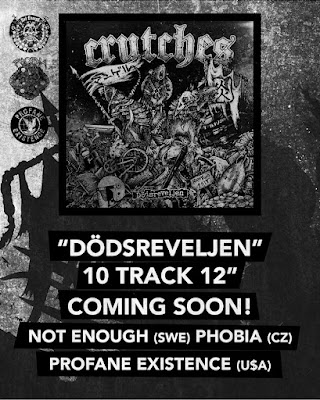 HELLSHOCK - s/t - new album is out and available on bandcamp 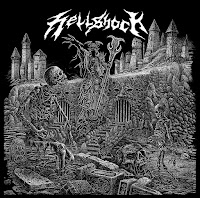 "We're excited to announce our new album is up and available to listen to on our Bandcamp! Our 4th studio album, and first in 13 years. The vinyl should be available in the next week or two followed by cassettes and CDs etc."
nothing more to say, some dark and dangerous stuff, enjoy here: 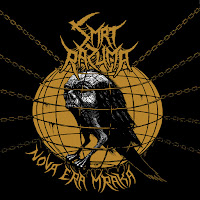 Smrt Razuma recorded new album some 4 months ago at Studio Depth in Zagreb.. while waiting for the physical releases on LP, CD and tape there are 3 songs published on their bandcamp to check how the whole thing will sound like.. brutal artwork for front cover is done by Nesha of Doomsday Graphics and layout by Mind Eraser..
check it out here:
BANDCAMP
Objavio/la ..crucified freedom.. u 09:16 No comments:

NUCLEAR ALTAR is back!!! 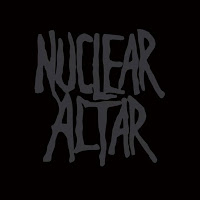 some surprising and more then great news from Požega.. crushing d-beat crust metal band Nuclear Altar which is more than familiar to the regular readers of ..crucified freedom.. are active again.. once again with some line up changes (but it all stays in the family, hehe), original drummer Neno is back, Kktz will take bass and vocals while new guitarist will be Mata.. this will be like 3rd stage of the band, if I'm not wrong..
if you ask me, it sound interesting and I'm really glad and highly impatient to hear more news from them, maybe some gig and hopefully new material..
Objavio/la ..crucified freedom.. u 20:41 No comments:

I didn't check my email last week or two and yes, maybe it's a little late, they already did more than half of a tour, but you still can catch them somewhere.. today they are in Postojna, Slovenia and by the end of the tour they will hit Budapest, Wien, Bratislava, Praha and Trutnov on Obscene Extreme..
oldschool grindcore from Lyon, France.. 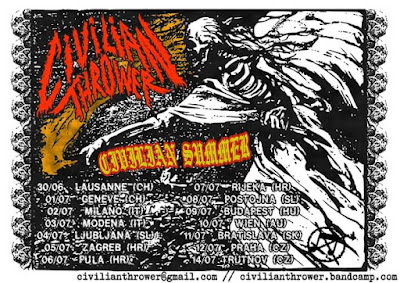