last post in those "let's bring some noise" series was five years ago, hahah, totally forgotten.. but now it's time to bring it back to life again.. at first, in this section was supposed to make short reviews on all the bands requests I was getting in e-mail, and later, because everyone gave up on me, mostly because my laziness (on the blogs in general as well) and almost nobody send me their links (and thanks on that, because it started to be pain in the ass) just to review some stuff I was listening online and didn't have in physical form, and we continue in the same tone, I realized I have numerous good stuff bookmarked in internet browser and listening to some of those constantly in last 3 or so years and have a lot that I wanted to share here and with time I forgot, didn't had the time or whatever the exact reason was.. so, let's go!..
HAK ATTAK - Off To Fight [2020] (7") Hak Attak are really good crusty hc punk band from Slovenia, they are known here and already pretty long lasting but somehow underrated in my opinion.. I follow their works since the beginnings and remember when they released excellent album Brainsore in 2018 that I listen it on repeat countless times and from time to time always returning to their bandcamp but then somehow forgot on them until I saw that they were in line up for this year Monteparadiso festival, then I hurried up on their bandcamp again to play Brainsore few times and surprise, already two new releases are there, split with Morbid Mosh Attack and this EP..
Off to Fight is self released by the band like 7’’ EP on vinyl, two years ago, believe it’s still available but is also offered for free download.. it’s consisted of 6 songs from minute and half to two minutes long, mostly direct and fast hc punk with crusty rough female vocals, accomplished by some, kind of “backing” vocals which reminds me on some old hardcore bands style, as everything else in their sound reminds on those past times when hc punk was played without unnecessary complication, simple and in your head.. it definitely don’t sound like something from 2020, and that’s a compliment..
BANDCAMP
LIFELESS DARK - Who Will Be The Victims? [2018] (tape) 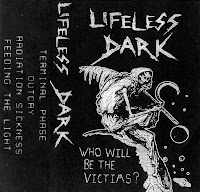 I remember this release, when it comes out in 2018, bring up quite some dust, make big interest and explode all over the internet and it’s still more than actual today.. first thing that comes to mind while listening this is obviously mighty Sacrilege with whom they are heavily influenced.. there was, or still is actually this little trend in the USA in last ten year or so of many Sacrilege like bands pops out every now and then and openly worshiping or paying tribute to them, acts like Mortal War, Terminal Conquest, Subversive Rite, Versklaven, etc but to me personally Lifeless Dark somehow points out the most.. they sound amazing, I’m not into metal, but those thrashy guitars, maaan, are damn perfect, same as angry vocals which bring to the all thing some crusty feel and which is almost impossible to distinguish from the ones of before mentioned Sacrilege, while guitars are even more heavier and nastier here.. all together makes perfect blend of metal punk / stench crust for probably the best debut in last few years..
tapes were self released by the band in two editions if I’m not wrong, both sold out fast so now you can check it on bandcamp and youtube only or if you are fortunate enough to see them live somewhere..
and as there’s not any presence of them on social media and internet in general, at least I can’t find anything, we can all together just hope there will be some new recordings in the nearest future.. can’t wait!..
BANDCAMP
POROK - Demo [2020] (tape) I don’t remember from where and when I found out for this interesting band just know that I have their bandcamp page in my bookmarks list and often I click on it..Porok is band from Turku, Finland but singer is from Belgrade, Serbia and she sings on Serbian which sure gives them some originality while music is also pretty interesting pissed of hardcore punk like blend of old school finnish hardcore and ex-yu hc punk from 80’s.. this demo was released on tape in September of 2020 by Best Seller Records and Active Rebellion in 100 hand numbered copies.. it have 10 songs in above described style, fulfilled with clean but angry vocal (which totally remind me on the vocalist of Apsurd, btw, who are maybe better known to regular readers here on ..crucified freedom..) shouting lyrics on Serbian, dealing with maybe typical but important and still relevant themes as war, personal demons, life choices and struggles, social and politically stuff, etc.. there are original lyrics and their translations on their profile and the whole thing is offered for free download.. song Hvala somehow pops out and to me is the best, but check it for yourself.. don't know anything about them, if they are still active or no, so if someone knows, please enlighten us..
BANDCAMP
DESPERATE TIMES - s/t [2022] (online EP) 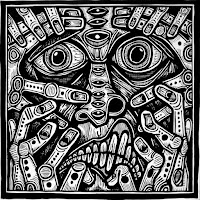 I discover this band few months ago completely by accident, like some suggestion on bandcamp while listening to something else.. and what a hit this was, straight into the head, what a great band.. there were immediately at least two indicators that I will like it, I notice that they are from Halifax, Nova Scotia in Canada and that they covers Detestation’s “Why do They Cry” as the last song of this EP.. and great name and artwork I don't even need to mention..
since the early years of my beginnings in hc punk and crust waters I was well aware that in some faraway town Halifax there is strong and developed scene, mostly thanx to Kktz’s Fecal Forces Production and his Nova Scotian Jigs & Reels compilation tape but also bands like Disabuse, later Existench, System Shit and similar which was quite good represented in our local diy distributions.. also later, in internet era I discovered more awesome bands from there like Napalm Raid, Zygome, Fragment, Contagnium and the like, same as part two of Nova Scotian Jigs & Reels comp., this time released by Canadian label Gimp Recordings.. don’t know what is with this Halifax, is it something in the air or in waters there but you must admit they always had and still have some respectable bands.. also there’s some rumors and opinions that the bands from there are more known in the rest of the world than in Canada, because of somehow isolated geographical position and difficulties with touring but they still manage to do a lot of them..
however, for Desperate Times I never heard before but then when I press the play button on bandcamp, that was it!.. love on the first sight.. there’s everything what I like, multiple vocals, crusty sound with strong anarcho punk attitude and even with some peace punk feel here and there.. all that packed in 4 fast songs and some 9 minutes in total, it means short but explosive.. don’t know if any physical release exists, (hope there’s some 7’’ somewhere because great material and artwork) same as any additional info about the band, just that they are pretty gig active and already toured USA and Mexico and according to their bandcamp page they have great demo from 2018, as well as album “Peace at Last” so while you’re there be sure to check that out, too..
BANDCAMP
DEPOPULATION DEPARTMENT - Another War Victim [2021] (CD) 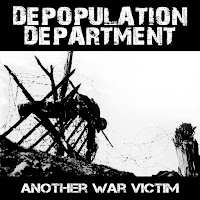 and now something little different and maybe something I don’t listen every day.. I had some grindcore period in the past when I was sucker for bands like Agathocles, Rot, Magrudergrind, Unholy Grave as well as a bunch of obscure bands from 90's and early 00's, mostly I was sticking to socio-political part of grindcore and try to avoid gore and porn grind but there apparently were few bands singing about some human anatomy, autopsies and medicine shit which I never understand or give fuck about but music was awesome.. one of those were Haemorrhage and they were always something different than others, I always feel on some strange way some punkish vibe in their music which never have much sense to me until later when I discovered that they have album Punk Carnage where they played covers of old Spanish punk bands and on this album they pretty much sound like real d-beat punk band.. they obviously have some love for punk and crust because later two members from Haemorrhage along with the ones from Ultimo Goberino and Avulsed formed Depopulation Department and "Another War Victim" is their latest album and also first full length after the debut EP "Life Kills"..
there are even 14 lengthy songs, sound is similar to above mentioned Haemorrhage album, like fast old school punk with m/f vocals, one is deep grinding and the other more clear but angry and energetic. there's  probably too much short solos on guitars inserted in every song, all songs seems too similar one to another and I can't run away from fact and feeling that they are members of goregrind band who decided to play punk crust for first time and just for a little change..
this is released as CD on Hecatombe Records in 2021 in 1000 pieces and believe it's still available..
album with which I’m not impressed like from others from this post but still kind of interesting because all the story..
new album named "Starvation" is also done and soon will be released on 10" vinyl..
BANDCAMP
Objavio/la ..crucified freedom.. u 13:39