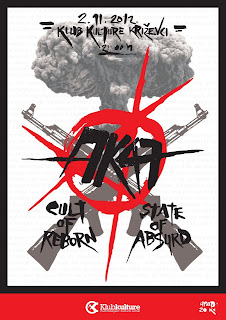 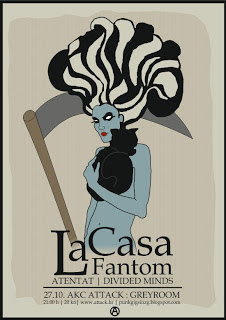 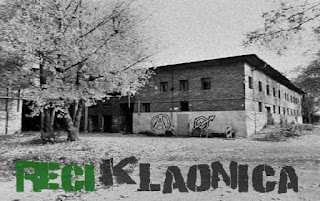 okay, let's go.. I want to visit this squat already for long, long time but because of who know what (my lazy ass, most likely) I still wasn't there, despite the fact that it exist for more then a year and half now.. also wanted to write something about it and spread the word 'cause there isn't any info on english.. and all because of the fact that this is the only squat here in Croatia, and one of the few in wider area which function on totally autonomous way and real d.i.y. ethics and principles which is, in my opinion, the only true way of how squats should look like.. I sincerely do hope that isn't to late, because crew from the squat are facing with attempted eviction these days, but we will come back on that later..

the story begins in winter on february the 14th, 2011 when few people broke into the building complex of ex-slaughterhouse after some previous more or less successful attempts of squatting in some other parts of a town.. they found the most appropriate building between more than 30 of them which all were unused and abandoned.. with the time more people gets involved and they succeed to clean up the place and bring it to fine condition in short time.. 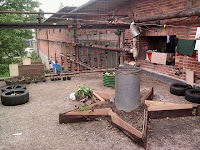 the building has 2 floors, the upper floor is residential and it's consisting of 17 rooms; living room, dining room, kitchen, bedrooms, 2 toilets, workshop, pantry for recycling, reading room, sewing room, etc.. after one month they organized 1st bigger event, getting to know the people about the space and all the story behind it.. now they have many events, parties, d.i.y. workshops, free-shops, few gigs, etc. behind them.. also, today there lives about 10 people but this number constantly changes.. of course if you are socially engaged, artistically minded, conscious people or a passenger who needs a place to sleep and a warm meal, you are welcome..
there were some small threats from the police and owners before, but as I already mentioned on the beginning, these days they are faced with serious threat to eviction from the side of complex's owners.. the following article is published on the Contra Info pages:

"ReciKLAONICA squat, located on 66, Heinzelova Street in Zagreb, is threatened with eviction. The informal collective of artists and social activists that develops its activities in the spaces of the old abandoned Zagrepčanka factory, owned by Zagrebački Holding, is addressing a call-out for solidarity against the eviction of the squat by the city’s authorities, who have already cut off the power supply.
The building is one of around 300 abandoned and neglected spaces in the city of Zagreb, and for the last 19 months has served both as a housing project and a space that hosts various cultural and resistance activities. Free workshops, sharing food, free flea market, live concerts, free library, a music studio and rehearsal space, a free store ‘take it or leave it’, all available to anyone who shows interest in acquiring or sharing skills, cooperation and mutual assistance, and non-institutional organizing.
The squatters are in need of legal aid, temporary shelter for a couple of dogs in case of eviction, as well as physical presence of solidaritarians in the space, in order to resist the repressive operation. Let us remind that money-free spaces in Zagreb, like reciKLAONICA squat, are very few and let us also emphasize on the multicultural importance of the project, since many guests visit regularly the place from other countries and participate in its activities.
Squatters take this opportunity to urge people to support the fight for free artistic and activist work within the former industrial premises of Zagrepčanka. You may contact the collective at: violent0pacification@gmail.com

Hands off the squats!
Solidarity with reciKLAONICA!"

also, some mainstream media informed about the situation but with some inaccurate info..
in short, eviction is delayed because owner's competent man didn't know how to handle situation and the only thing that police were able to do is to identify the crew from the squat and give their data to owners and suggest them to try solving their problems on the court..
even if they were informed that in monday someone will come to take down their windows and doors it did't happen..
in meanwhile crew from the squat found out that every other attention to evict them, except lawsuit, is illegal considering on that nobody try to evict them within 30 days of the occupation of the place, so as a matter of fact now they are residents protected by the law.. it sounds nice, but we will see how things will work in the future.. just hope that they won't experience sad destiny of so many squats around the world lately - eviction..

-for all info, support and other write to: violent0pacification@gmail.com

-also visit their web site for more information and updates at: http://reciklaonica.blogspot.com/

-some other links related:
http://en.squat.net/2012/10/04/zagreb-croatia-reciklaonica-squat-threatened-with-eviction/

update 25.10.2012.: things calmed down now and eviction is delayed until further notice.. crew from squat are intensively working and planing new events.. so Klaonica squat stays!.. 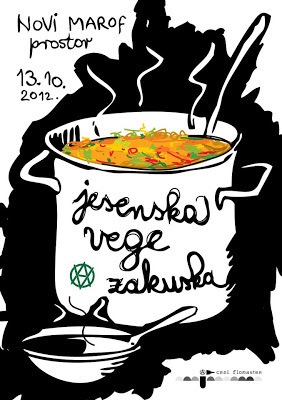 Freedom in Fire basically are some people who organize DIY concerts together in Hellgium.

We all share anarchist ideas and are strictly antifascist, antisexist and against homophobia .We share a great love for the DIY anarchist scene and for music. We see music (and ‘our’ concerts) as a way to express our feelings about the world we are living in and to spread ideals, as something that can bond certain groups of people. As we got into anarchism because of music and concerts, we think it’s important to try to involve political views as much as possible at our concerts – making them benefits for various actions or groups and trying to spread some information through various channels.
Racist, sexist or homophobic behavior will not be tolerated – NO DISCUSSION. We don’t want it and we hope nobody does. Claiming to be “apolitical” isn’t a good coverup for tolerating racism – so don’t give us that crap. We also believe that everyone should be responsible enough to NOT fuck anything up, intoxicated or not. We don’t propagate a straight edge lifestyle nor do we propagate intoxication – everyone is free to make those choices themselves, but either way, show some respect towards the people organizing, the venue, the people living there (if it’s squatted) and last but not least towards the neighbors.
We have our views and we are idealists, however we do organize concerts to have a good time, have a chat with some friends, have a beer (… or 10), listen to some good music, have a dance (nodding with your head counts as dancing, no worries), get the latest record or the occasional merch, meet new people and to get crazy at the afterparty. But as said; we also organize these things to support various causes, to inform people about how we look at the world (and especially at those in power), to let you gather some booklets, stickers, buttons or patches, to discuss various topics, to support those bands who actually have something to say.

Feel free to contact us, if you need help with your tourdates/concert etc etc. We will see what we can do. Please keep in mind we aren’t organising shows as our fulltime job… (unfortunately). Also, if anyone has any sort of questions about our views, wants to discuss them, wants to receive some extra information or wants to be more involved, come talk to us at one of our concerts or send us a mail! Our e-mailaddress is freedominfire@riseup.net

And to other organizers (in Belgium) : we love cooking so if you would like us to make a vegan meal for the hungry massas at your concert, send us a mail!

what a fckn great concert!! Doom and Kontatto are in my top 5 bands, then D-clone and C. Sterminii in top 10 for sure.. yes, all of them except D-clone I already watched before but now they are at the same gig, man it's perfect line up, better then on any festival I've ever been.. it seems that another one long and interesting trip is in front of us, so if everything will go well, see you fuckers there!.. 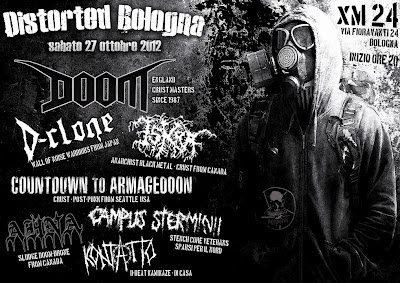 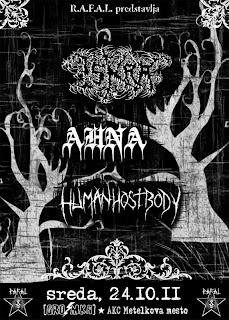 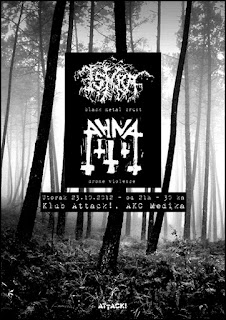 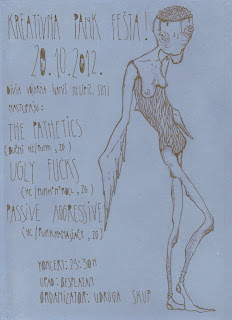 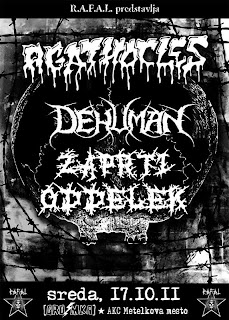 Location of the festival is Kaboutermansstraat 50 in Lueven, Belgium
Entrance fee will be around one euro per band. Any benefit goes to the anarchist library of Ghent and the anarchist library of Leuven. Cheap
drinks as always. Vegan food all days. Every bit of help is
appreciated (diy!). If you want to bring a (political) distro please
do! We'll make sure you have room to put your stuff.
!!NO DOGS!! Or other animals for that matter. We are organizing a
festival, we're not a doggysittingcompany. Loud music, drunk punks and
broken glass on the floor might be your idea of a perfect holiday but
it certainly isn't your dog his/her idea of a wonderful day out.
Racist, sexist, homophobic, ... behaviour will obviously not be
tolerated. Neither are cops. With or without a uniform on - we don't
want you here.
On Thursday the 4th of October there's a demonstration against animal
testing leaving at 't Ladeuzeplein in Leuven (center) around 14h.