For years I've been guilty of bashing the internet, the computer generation, I-pods/mp3's etc... Shortly after Velimir asked me if I'd like to write a little something for Crucified Freedom, I was looking at his site and it hit me that because of the internet, and sites like MySpace, I had been afforded the opportunity to be exposed to all sorts of music, labels, & distros (you know all the different aspects of our "scene" that it takes to make this thing happen). I would have never known about all of it had it not been for the very thing I had denounced as evil and destroying, our scene, society & world.
So it got me to thinking about how maybe sometimes I’m to quick to shut off anything out of my comfort zone, my realm of understanding or outside of what I decide to be right and wrong. Usually I do this without really giving thought to investigating it or giving whatever it is a chance. Pretty fuckin' closed minded, wouldn't ya say?
Let's face it years ago, (you know back in those good ol' days, that we won't shut the fuck up about!) if Crucified Freedom existed, it would have been a black and white Xerox style 'zine and the only way I probably would have heard about it is if I was fortunate enough to happen to stumble across it here in the states (what's the odds on that?). Or if I had paid enough attention to particular issues of Profane, Maximum or Heartattack, where this 'zine ended up in the ‘Zine Review’s, odd’s are it probably would have never made it outside of Croatia.
So here I am, writing about an awesome online ‘Zine, in the comfort of my own home. The chances of this happening in the good old days, that I get stuck romanticizing about all too often, are very slim!
I'd like to take this opportunity to say thank you to all the punks out there who had the courage and the insight to explore the possibilities of a new medium for our use and to expand, explore, develop and strengthen our global scene.
Man, today I’ve embarked on a new friendship. I don't know about anyone else but that's what a lot this is all about!
Thanks so much Velimir, tonight my mind and my eye's are a little more open! YOU ROCK!!!!!
Chad/Burnt Bridges
Objavio/la ..crucified freedom.. u 20:14 No comments:

-the history of Ungdomshuset:
Ungdomshuset (literally "the Youth House") was the name of the building formally known as Folkets Hus ("House of the People") located on Jagtvej 69 in Nørrebro, Copenhagen.

Ungdomshuset was build by the local workers movement to function as a base in the struggle of social justice. Here they had meetings and parties during the fight. In the 1950's many labour unions build their own houses and the house was more or less empty until the 80's. In the 80's, the squatter's movement grew, and it was in this very house that the Initiative for a Youth's House met and formed their demands to the Town Council. Within two years of massive house squatting the Town Council gave up and gave Ungdomshuset to the movement.
Ungdomshuset, was a four storey political and cultural centre. It was the base of the radical D.I.Y. scene in Copenhagen, a venue for music and rendezvous point for varying autonomous and leftist groups from 1982 until 2007 when - after prolonged conflict - it was torn down. Due to the ongoing conflict between the municipal government of Copenhagen and the activists occupying the premises, the building was subject to an intense media attention and public debate since the mid-1990s.
The house had activities going on almost every single day, from Monday meetings and political debates to shows and cinema in the weekends. Furthermore, the house had different kinds of workshops and practice rooms for local bands.
Ungdomshuset was an alternative to a world causing conflicts between people. We knew that we were not able to make a perfect society within this world, as its laws and restrictions are pressuring us and because we ourselves are also manipulated by its ways. The primary difference between the surrounding society and us is that we constantly fight the structures that causes problems between people
- and you are still free to join us!

-informations about the new house (Dortheavej 61):
On the 11th of June 2008, it was decided in their city council to let us take over two buildings in the North western area of the city. 1st of July we started moving in...
The house and area The two buildings used to be a part of a communal social centre that we are now sharing ground with.
It's situated between Dortheavej and Rentemestervej in the North-western part of Copenhagen, approx. 2,8 km from Jagtvej 69.
The house consists of two buildings. We got the first on July 1st, "The annex" which is the smaller of the two with 600 m2. The second was given to us on January 1st 2009. The total of the two buildings is 2000 m2 which is the same area we used to have in Ungdomshuset.
The ground floor of the annex is the venue and bar "Dödsmaskinen" which holds about 200 people.
The 1st floor is the home of our book café, big kitchen and the room they share to have film screenings, debates and other arrangements.
2nd floor is dedicated to training and other active activities such as yoga and dancing. Bigger meetings are also held in this room.
The ground + 1st floor of the main building is the house' big concert space with a nice big balcony and room for about 400 people.
The 2nd floor, the various sized rooms are split up between a dozen creative workshops (like screen-printing, sewing and photography), different offices & meeting facilities.
The 3rd floor will have a bunch of rehearsal rooms for bands to practice in and a studio for recording music in.


here is new number of Schizofrehn 'zine.. again, like previous one, on 40 pages.. every number have one main theme, in this one that are females active in any way on punk scene.. very good idea, I think.. bands that was interviewed are Babyshakes, Glidslem, Korsbarsfettera and Deadly Seven..besides those 'views there are a lot of articles by or interviews with girls from all over the world and some reviews.. 'zine is free..just download and print it!

this legendary squat in Poland is in trouble, again.. you can read something more about them in one of my previous post here.. they need our support so if you can help in any way or just to spread the word, do that! this is their call for help.. 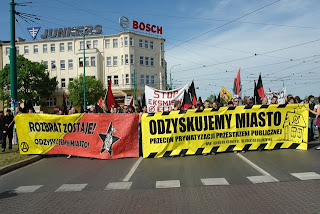 The auction of the grounds where Poznan's Rozbrat squat is situated will take place on 26th March at 10 a.m. Since January 2008, when the bailiff came to the squat for the first time, we have managed to keep the squat, through different legal actions and protests. If nobody buys the ground on 26th March, the next auction will take place within the next 2-3 years. That is why this is a critical moment for us.

This years we will celebrate 16th year of the occupation of the buildings which were abandoned by a company, which took a lot of loans and ran off abroad. 16 years ago the buildings were squatted by people from the local anarchist community. Since then we have invested a lot our resources and work to renovate and rebuild the rooms that were going into ruin and we have also started a wide political, social and cultural activity. Currently, around 20 people live at Rozbrat, concert and rehearsal rooms, a library, a gallery, screen print and bike workshops, places for meetings and debates are also there.

Recently, as a part of the defense of Rozbrat campaign, we have actively taken part in the meetings of the city council and its different commissions, where they have been debating over a local land development plan of the Solacz district, which also includes the premises of Rozbrat (on the official map of the plan, the premises of Rozbrat were marked as “wastelands”). Because of significant resistance of the inhabitants of the district, the plan still have not been outvoted by the council. Since January 2009 we have made a lot of steps towards and agreement with the city authorities about our situation. Vice mayor of Poznan visited Rozbrat and he wasn't able to offer anything, although, in front of the media, he claimed that he has an alternative option. We asked about this offer in an official letter last May and we still have not got any answer.

On the 9th May 2009 we showed that Rozbrat has huge support. Around 1,500 people came out to the streets for our demonstration, those were not only the inhabitants of Poznan, but also our supporters from various communities and organizations. So far, there has been one auction of Rozbrat but nobody wanted to buy it. This time, according to the law, the price will be lower.

Thanks to all the actions in defense of Rozbrat that we have undertaken, we haven't been so strong before, but still, the distribution of forces is not even. Rozbrat is in danger. That's why we call everyone to support our protest and to take part in the demonstration on 20th March in Poznan.

We won't give up without fight! Rozbrat stays! 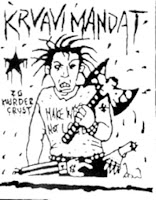 Krvavi Mandat was another one great band from Croatia which was active in late '90..they were playing crust punk with very politically engaged lyrics with anarcho themes.. they were from Zagreb.. some time after their splitting up they get back together and play at few gigs but I don't know how long was all that going.. I don't have any more info about them so here are some lyrics and covers from their releases..
line up was: Tarić (vocal), Marva (guitar), Miro (bass), Oliver (drums)
discography: 1st and 2nd demo published on tape, live recordings on 4-way tape with Speedball, Disabuse and Shears, and 9 songs on 3-way tape with S.M.C. and Gamad 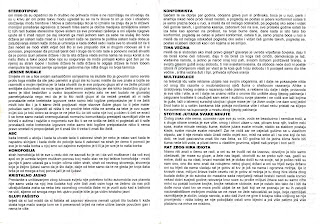 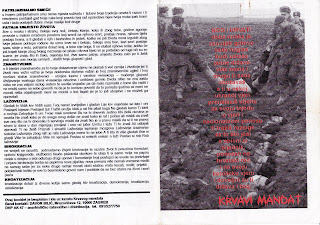 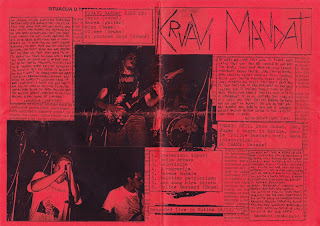 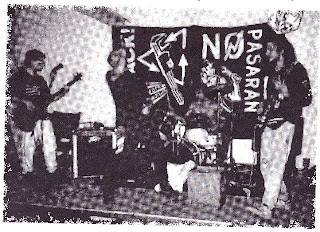 you can download some of their releases from blog Nečista Savjest HERE
Objavio/la ..crucified freedom.. u 16:32 2 comments: