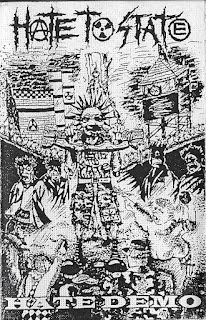 awesome Terminal Escape, the best blog out there, along with Terminal Sound Nuisance (both have "terminal" in name, hmmm...) almost never disappoints.. this monster of blog feeds us with cassette rips on daily basis since 2009, it means every day new damn tape in last 14 fcking years, can you at least imagine which number of tapes and amount of effort we talk about here?! - I fcking can't.. and I'm amazed every time I see new post there.. every day..
the other day mr. Wizard posted demo by Belarussian anarcho punk crusters Hate To State, until now totally unknown band to me, as many about which he writes to be honest, but when for the obscure ones from the States it isn't even strange they are unknown to me, this one somehow surprises me (positive, because it's always nice to find something new, although old, and that good) and the fact that I missed them and they are from Europe, were active in 90s and have this specific east european anarcho crust sound for which I'm complete sucker is even more surprising.. only the evidence and remainder that there's plenty of fish undiscovered in deep dark see of 90s east european crust punk..
as you probably realized by now they play classic for that time crusty anarcho punk with dual m/f vocals, demo consists of 10 powerful raw attacks, riffs and drums strongly reminds me on Totalni Promašaj and Debeli Samuraj from Serbia, which came first on my mind, probably because of the beginning of the song "I Hate All I See" but with more crusty vibe in vocals and rawer production and sound in this case and something faster than above mentioned, more like bunch of old Polish or Czech bands from those times or try to imagine rawer, filthier and more primitive Antiglobalizator, maybe more known band, also from Belarus.. considering bands name, titles of the demo and songs, cover art but most the fact from where they are coming I assume lyrics are also angry as the music and politically engaged which were almost always in common to similar bands from that era and geographical positions..
according to discogs this demo is from 1998 and it's only recorded material by them but in the download folder from Terminal Escape there are even 19 uncredited tracks included from who knows where, sadly without female vocals but awesome anyways..
- comment from discogs:
"Although the band recorded and released only one demo tape (Hate Demo) they are considered as legends and pioneers of Belarusian DIY scene. Bassist Igor also released fanzines and had a distro. Hate To State was active until around end of year 2000. After the band split up most of members formed a new band called 451°F and had recorded and released a split tape in 2001. In 2013 Hate To State had a gig in Minsk after 13 years of silence. They also performed live in 2014."
- for download link, nicer review than those my rumblings and to say thanx go to Terminal Escape
- for video of reunion gig in Minsk from 2013 go here..
- video of demo below is from Narcoleptic Fox youtube channel..
- you can read interesting interview with them in Profane Existence #39, they talk about Belarussian diy scene, anarchist movement and political situation there as well.. in this number there are also views with Misery and great Shitlist.. you can check it here..
thanks Axe for mentioning it in comments..
Objavio/la ..crucified freedom.. u 21:11