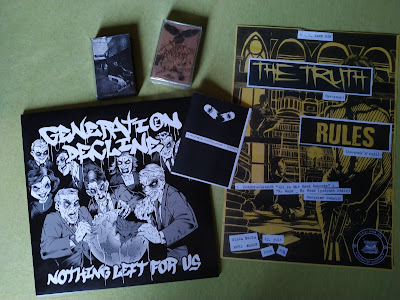 last Saturday I was on a gig in Novi Marof, actually it was the 1st stop of new Rules / The Truth euro tour.. arrived there on last few songs of Rules so didn't saw much of them but I'm glad that I saw The Truth once again, 'cause even if their kind of hardcore isn't maybe my favorite genre but they sound really good live.. they had short but pissed off and energetic set with a lot of talk in between the songs trying to communicate with crowd and they kinda succeed in that.. they played this gig with a little mixed line up, the 2nd guitarist was on bass 'cause the original bass player was late during his job obligations and was joining them in Zagreb the day later.. this was their first show in such line up and after some minor "problems" at the beginning it sounded and ends up just well..
anyhow I'm glad that I was there, have seen some old friends after a while and get bunch of stuff from L, like Smrt Razuma and Indikator B tapes which are still pretty fresh and beside CC's new album probably the best stuff that came out from domestic hc punk scene lately.. then Generation Decline - Nothing Left For Us LP, they was playing at Stara škola few weeks ago, and new 'zine made by the crew from Marof, actually some kind of art 'zine about already forgotten skate scene in this town.. nice catch, isn't it?!.. all this L was collecting for me through last few months and he officially becomes my hc punk records dealer, heheh..


by the way, Rules / The Truth tour is still going on and you can still catch them on the road somewhere, check the dates and places on the poster below.. 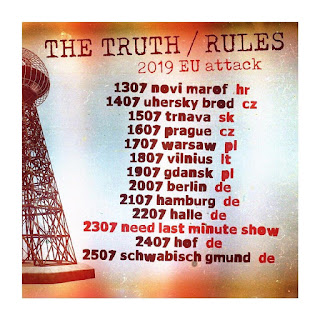